The CW has announced the premiere dates for two highly anticipated new shows – Roswell, New Mexico and In the Dark.

END_OF_DOCUMENT_TOKEN_TO_BE_REPLACED

As many of you know, I have a love/hate relationship with The 100. When its good, its REALLY good and one of my favorite shows on TV, when its bad its really bad. I promised I wouldn’t watch or cover season five, but once again I’m hooked and loving all the non-Octavia moments this season.

Episode 5 looks like another solid installment. Hit the jump for lots of photos and clips for this week’s episode! Omar Madha directed the episode written by Nick Bragg (#505). Original airdate 5/22/2018.

END_OF_DOCUMENT_TOKEN_TO_BE_REPLACED

What up people! The show that vexes me to no end, The 100 returns to The CW for its 5th outing this week and I have to say the first episode of season 5 made me remember why I used to adore this show. Unfortunately, after the greatness that is episode 1, episode 2 brought me crashing down to earth (see what I did?) and reminded me why the show drives me NUTS. I won’t bore you with the Tedious Plot Summary (TPS) because if you are watching S5, you know the characters already. This review is based on the first 4 episodes and contains minor spoilers. The 100 returns to The CW Network, Tuesday, April 24th.

END_OF_DOCUMENT_TOKEN_TO_BE_REPLACED 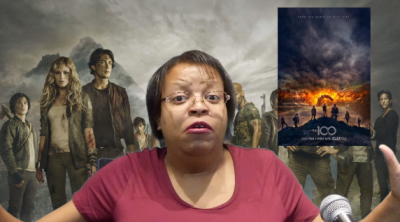 END_OF_DOCUMENT_TOKEN_TO_BE_REPLACED

As Eminem once sang guess whose back? I had no intentions of watching or recapping The 100 again this season, but even though the show enrages me, it’s nice writing about something that I’m actually passionate about. I can’t help it. There was a lot more good than bad going on in the season premiere.

END_OF_DOCUMENT_TOKEN_TO_BE_REPLACED 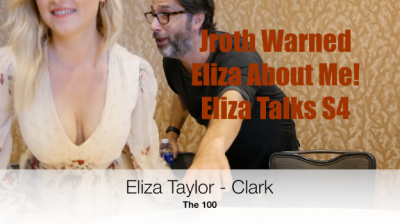 Anyone who follows my ramblings know how much I absolutely loved the first two seasons of The 100 on The CW. You also probably followed my slow decent into madness during my weekly recaps of S3. I never believed that “rage quitting” was a real thing until The 100. It’s a strange feeling, being so passionate about something that it when it goes off the rails it literally enrages you enough to just saying “fuck it, I’m out.” I normally quit shows when I no longer care and am ambivalent.

This feels different, I know the cast and I still love the show and want to give S4 a chance but I know it’s going to drive me BatS crazy. I had the opportunity to talk to the show’s creator Jason Rothenberg and star Eliza Taylor and you all know I have no filter, so you can guess how it went. The 100 Season 4 premieres this week on The CW. Jason did tell Eliza to watch out for me, because I ask tough questions.

END_OF_DOCUMENT_TOKEN_TO_BE_REPLACED

The 100 returns this week, February 1. I rage quit the show last season and highly doubt I’m going to watch S4. I’ve interviewed the cast so many times that I still feel connected to the show and want the cast to succeed. I purchased the S4 iTunes pass, so I may binge it at the end, but I can’t bring myself to recapping again especially after seeing that wretched S4 trailer. The best I can do is preview each episode.

END_OF_DOCUMENT_TOKEN_TO_BE_REPLACED

MTV’s 3rd annual Fandom Awards are set to take place next week in Petco Park. It’ll probably be one of the highlights of SDCC. Through an exclusive partnership with Tumblr, votes for “Ship of the Year,” will be cast solely on Tumblr.  MTV will launch a unique post for each of the nominees on the MTV Tumblr page, with the winner determined by the post with the largest vote count. Whoever designed and approved this awful logo should be fired.

My vote is last year’s Clexa – not this year because they ruined it – before the death we shall not name. The death just put an exclamation point on that cluster f that was this season. Maybe I’ll go with Stydia, I do love me some Stiles, but they haven’t been a thing in awhile.  Is it sad that I watch all of these shows and know who the ships are? I’m a fan at Comic-Con, come on!

END_OF_DOCUMENT_TOKEN_TO_BE_REPLACED

I was in The Vegas last week hanging out with movie stars at CinemaCon – you know how I do, so missed recapping last week’s ep. Overall I liked it, but I’m sick to death of Bellamy’s bullshit and the fact that he never suffers any consequences for his actions. People act like he’s some 16 year old kid easily led around, but he’s a grown man who needs to accept responsibility for his reckless actions.

END_OF_DOCUMENT_TOKEN_TO_BE_REPLACED

Last week’s episode was a barn burner and renewed my faith that The 100 can turn a corner and go back to being great again. We saw Ontari become Heda by any means necessary. Clarke became the Flame Keeper and is now on the hunt for the only person that can stop Ontari – the mysterious Luna. Lincoln died, actually a lot of folks died last week. This week we’re back to what I hate – the COL storyline, but we’re also going to get more Arkers rebelling against Pike this week. So we’ll see how it goes. Check out the images and official synopsis below.