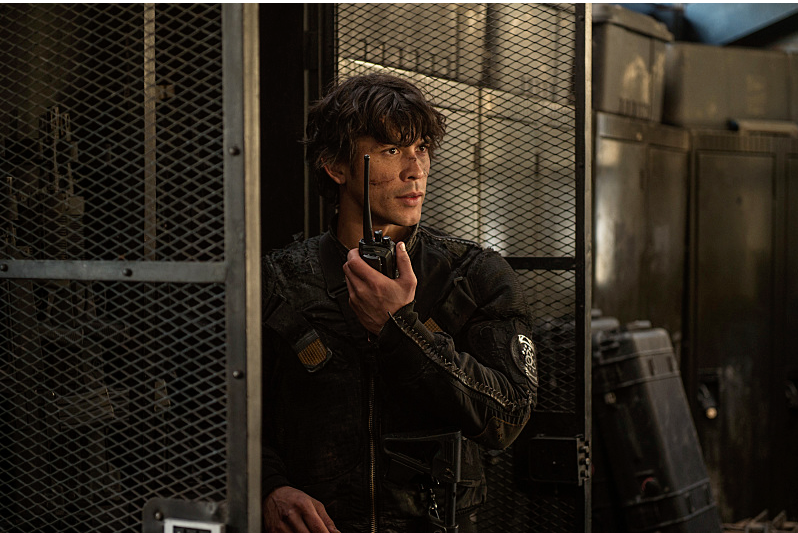 I was in The Vegas last week hanging out with movie stars at CinemaCon – you know how I do, so missed recapping last week’s ep. Overall I liked it, but I’m sick to death of Bellamy’s bullshit and the fact that he never suffers any consequences for his actions. People act like he’s some 16 year old kid easily led around, but he’s a grown man who needs to accept responsibility for his reckless actions.

The problem is he doesn’t give a shit that he murdered 300 innocent people and apparently, based on Clarke’s response last episode neither does she. At this point i’m sick both of them. There’s only 4 episodes left after tonight’s and at this point I don’t see how this wretched season can be saved. Even with that said I’d still graded the last 4 eps a B. But I don’t know why. The show is just frustrating the hell out of me at this point.

Let’s see what tonight’s episode – titled Demons has in store for us.

From the previews it looks like it’s a weird horror story with someone stalking Clarke and her annoying, whining band of delinquents this week. I’m guessing it’s Emerson – because banishing him was such an awesome idea. As always I’m going to try and skip over the COL garbage – I just can’t STAND that storyline. In the coming weeks it’s going to be harder to avoid.

Episode opens in the cave where Miller, Bryan and Harper are trading ghost stories. I’m loving this, it’s the original 100 bonding and having “fun” with each other. I’m really enjoying the additional screen time Harper has gotten in the last few eps – of course she’s going to die at some point. After Miller goes on a potty break, Harper is left alone when someone dressed like a grounder attacks her. Emori finds Murphy in the market and tells him she wants in on whatever scam he’s running on Ontari – who is looking good all cleaned up and in her full Heda gear. 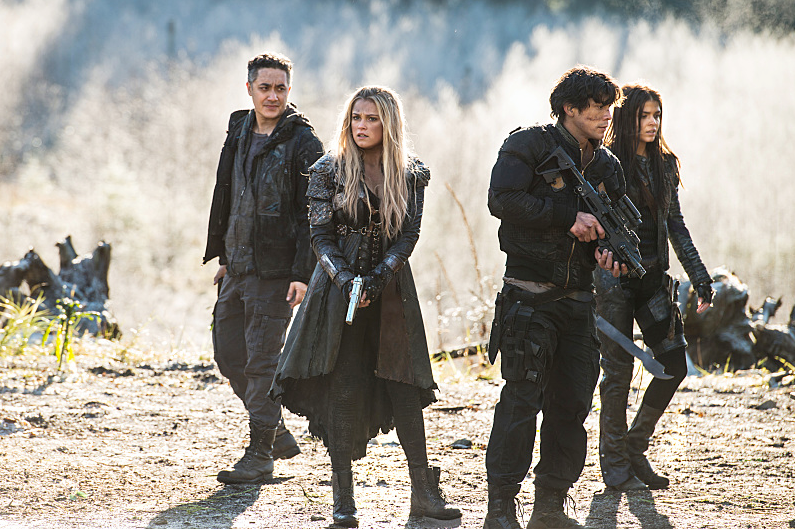 The annoying ones (my new name for Clarke and her delinquents) are heading towards Arkadia – why they would be stupid enough to go back there when they know everyone is under Allie’s control is beyond me and just stupid. Raven and the gang talk about Becca’s journal and the history of Allie and Allie 2.0. Because the audience hasn’t had this backstory explained 3 or 4 times in the last few episodes. We need to hear it one more time, because we’re too stupid to figure it out on our own.

Monty thinks that his mother may still be alive in the COL. Raven tells him that depends on his definition of “Alive.” Wait, what the hell, why am I talking about this stupid storyline! See what they did, you can’t avoid it now!  I don’t understand why they left the others in the cave behind to begin with – unless there just wasn’t enough room for them in the jeep. Arkadia is empty when they arrive. Looks like they returned to find Lincoln’s book in the hopes of using it to track down Luna. It’s just a little too convenient that everyone’s gone. 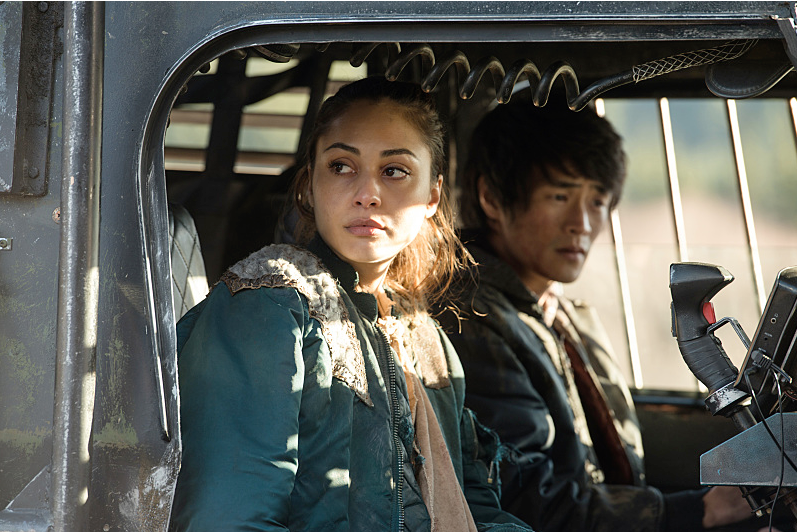 Raven tells Clarke that Allie’s mission is to chip everyone and they wouldn’t return to a place they already took. This tells me their next stop is probably a place like TonDC and then they will go after Polis. Sinclair tells Raven it would have been helpful if she was still connected to Allie to tell them stuff like this. What? Huh? I really like Sinclair, so of course I expect him to die.

Octavia has a mini-breakdown when she enters their former quarters. Jasper tells Octavia that it’s ok to fall apart a little bit. She tells Jasper that a warrior doesn’t mourn the dead until the war is over. She finds Lincoln’s book and it contains a map to find Luna. Someone attacks Jasper and then grabs Octavia. For all of her training, Octavia is a lousy fighter.

Murphy meets Emori in the Flame Keeper room. Emori tells Murphy that she recognizes some of the stuff in the room. Bellamy finds his beloved guns and once again think he’s Mr. Tough guy. Raven tells Clarke that she may be able to activate Allie 2.0. The code to operate the AI is Latin for seek higher things. Raven still retains some of the knowledge she gained from Allie. 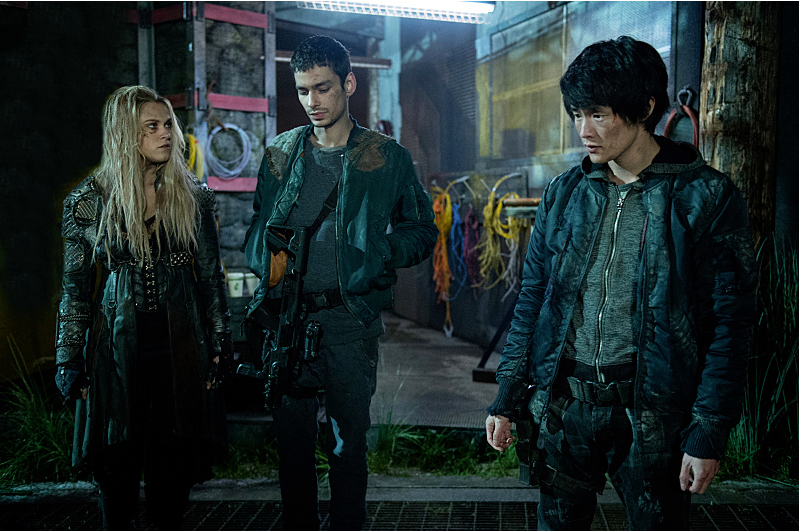 Monty asks Clarke what happens to his mom if they shut down the city of light. You killed your mom, get over it. Creepy music starts playing and Monty tells Clarke following it isn’t a good idea. They mystery man throws gas into the corridor. Clarke fights back and discovers that it’s, Emerson. Shocking. Not really.

After having sex, Murphy tells Emori that she has to leave Polis saying Ontari is crazy and that’s saying something coming from him. He admits that he’s sleeping with Ontari. Clarke once again starts to blame herself for everything – which is annoying. She tells Bellamy that she’s the blame for all of this because she let Emerson live.

Emerson cut the power to the hangar and goes after Raven and Sinclair. I hate being right! Now Sinclair bites the big one. I’m really getting tired of this show killing off every character that I actually like. After seeing Sinclair’s body Clarke realizes Emerson must be taking everyone somewhere.

Jaha just shows up in the throne room out of nowhere. He tells Ontari that she can be the real commander if she just takes Allie’s chip and it’ll link her directly to the original commander. It turns out Emori was working with Jaha and Allie all along.

Clarke tries to trade herself for her friends. Emerson tells Clarke that she took away all his family and friends that he wouldn’t be happy with just her life in return. He activates the airlock. I’m so sick of hearing about this goddamn mountain! The entire season has been the Arkers and Emerson whining. Jesus. Enough already!

Clarke mentions Emerson’s dead son to distract him to give her a chance, but Emerson quickly overpowers her and forces her to watch her friends suffocate to death. She activates the Flame and shoves it in Emerson’s head. Kind of a weirdly nice moment if you think that Lexa is in the chip, it’s Lexa saving Clarke yet again.

They find Lincoln’s body and Octavia falls apart. They give Lincoln and Sinclair a proper grounder send off. Octavia looks at Bellamy before storming off and telling everyone it’s time to go. Raven and Monty stay in Arkadia because they think they can use the mainframe to build a backdoor into Allie once Allie 2 comes online.

I don’t know, at this point I don’t know if I’m hate watching this or still like it just because I’m used to the characters. Then again, I can’t even say that because the Characters have been awful this season. Every one of them and now they are magically reverting back to norm as though the last 11 episodes never happened? I hate the fact that the show has become so badly written that every “shock” is predictable and pointless. I only saw the 30 second tv spot and knew it was Emerson. Even after saying this, I still liked seeing the gang back together, because it reminded me how good this show used to be. However it’s just not the same anymore and feels like it’s too little, too late.

This entire episode also invalidated all of Clarke’s Blood Must Not Have Blood nonsense. She’s always ok for Blood must have Blood when it’s someone attacking her or her people. As Lexa and Titus both pointed out earlier in the season. Ontari and Emori taking the chip was nonsense and goes completely against their characters. Yes Ontari is a moron of the highest order, but Jaha just shows up out of nowhere and offers her a chip and she just accepts it without even thinking about it or saying “Who the hell are you and why should I trust you?” Just like she did with Murphy.

Ok, yes, I hate this show now. I don’t know if I’m going to be recapping the last 4 episodes. I’m going to continue watching because I want to see how this cluster fuck season ends, but I’m done. I have zero desire to watch Season 4. Who am I kidding I’ll be hate recapping the next 3 eps. Is hate recapping a thing? I guess its a good thing that I still care enough to actively hate what the show has become. Indifference is truly the death nail.