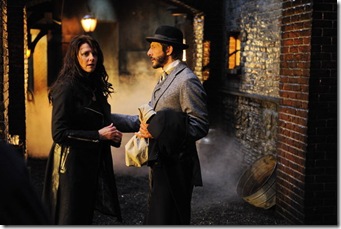 The third season finale of Sanctuary left off with Adam Worth [Ian Tracey] vanishing into the past to save his daughter’s life – and history be damned! As the episode faded to black, Magnus [Amanda Tapping] leapt through the closing time portal.

Tempus opens with Magnus appearing in Victorian London and chasing Worth, but failing to catch him because of a murder – one of the killings by Jack the Ripper. The same murders that we have learned were done by Magnus’ beloved John Druitt [Christopher Heyerdahl].

Druitt makes an appearance in Tempus, but the episode is predominately Magnus’ efforts to catch Worth – aided by Dr. John Watson [Peter Wingfield], who takes almost no time at all to figure out that she’s not the Magnus of Victorian London. As you might imagine, complications ensure.

Written by series creator Damian Kindler, Tempus is a unique addition to the Sanctuary canon – both in its setting and in some of its surprising even shocking – revelations. The visual effects are excellent – even knowing that London is CGI, it’s hard to tell.

Series mainstay, Martin Wood, directs with an eye toward giving us a Magnus we’ve never seen before – and Tapping certainly goes for it. Usually, when she gets pi$$ed off, she becomes more focused and intensely determined. Here, she almost rips Worth’s head off before Watson is able to restrain her.

At first, I was a bit put off by Magnus’ inability to control her temper, but as the Tempus continued, and she got it together [with Watson’s help], I realized the enormity of the task she faced and began to sympathize again.

Of course, this time, all of the history between Victorian times and the present might be destroyed if she fails – a burden unlike any she’s had to shoulder before. A situation for which she feels personally responsible. As a result, she comes across more as force of nature than just angry.

Tempus is fun because, on top of the possible repercussions, we get to see Magnus and Worth tiptoeing around their timelines – events we’ve seen before are now shown from completely different perspectives, giving us new insights into the featured characters and leading to at least one spectacular revelation. It’s also interesting to see the older, wiser [at least in Magus’ case] characters in direct contrast to their younger more innocent selves.