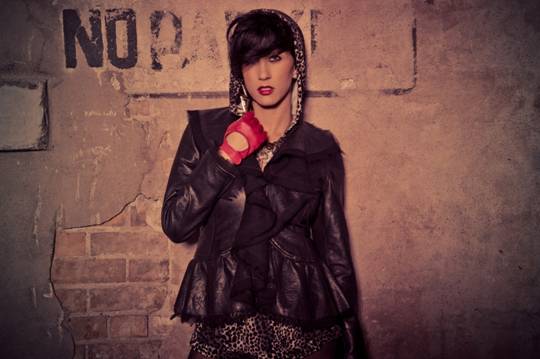 For those that don’t know S.O.F.I is short for Some Other Female Interest and their music can be found in the electronic/dubstep genre. S.O.F.I has a new upcoming EP entitled “Locked & Loaded part 1” and that will be available on October 24th, 2011. Here’s the press release with the additional details:

The multi-talented SOFI (Some Other Female Interest) is no newcomer. Having earned her stripes working with some of the biggest names in the music industry, she debuted on mau5trap as the voice behind deadmau5 singles “Sofi Needs A Ladder” and “One Trick Pony” from his globally acclaimed album 4X4=12. Now, SOFI returns to the label to deliver her explosive LOCKED & LOADED PART 1 EP, the first of a two-part series, consisting of dynamic collaborations with some of the most exciting electronic talent around.

SOFI’s LOCKED & LOADED PART 1 EP will be released digitally October 24 exclusively through iTunes and Beatport. The two tracks featured on it—“Broken Souvenirs” and “Joyride” featuring Vulgatron of Foreign Beggars—are both collaborations with Brighton-based dubstep renegades Millions Like Us, who have remixed the likes of Hurts, Morning Parade and N-Dubz and received support from Radio 1. Information on the LOCKED & LOADED PART 2 EP, which will be released on December 5, will be made available soon.

“Broken Souvenirs” delivers a powerhouse instrumental, building on a wave of delicate piano and swirling synths before dropping into a sonic onslaught of spiraling bass lines, pummeling drums and euphoric synths while SOFI’s spine-tingling vocals soar through the mix. The video, shot in London earlier this year and directed by The Moonrunners, made its debut this week on UKFDUBSTEP.COM and can be viewed at: http://www.youtube.com/watch?v=LLmUOOQauDI.

Meanwhile, fans can catch SOFI live this fall on the Meowingtons Hax tour supporting deadmau5 alongside Excision, Tommy Lee & Aero and other mau5trap artists. TeenVogue.com caught up with SOFI backstage on the tour; view it here: http://www.teenvogue.com/industry/2011/09/deadmau5-sofi-tour-diary#slide=1. She also appears with her Beatport smash “Beat of The Drum” from Moguai featuring SOFI on the complimenting Meowingtons Hax tour tracks compilation out now on mau5trap.

About SOFI (SomeOtherFemaleinterest):
As the voice behind deadmau5 singles “Sofi Needs A Ladder” and “One Trick Pony” from his most recent album 4×4=12 (Ultra Music), show, music and acting influence and shape SOFI’s life. An entertainment trifecta—singer, dancer and actor—SOFI has co-choreographed Avril Lavigne’s most viewed YouTube video “Girlfriend” and later on was enlisted to co-choreograph, sing and dance on her world tour directed by mastermind Jamie King. She’s also worked with Fall Out Boy, will.i.am, Butch Walker, The Von Bondies, Tommy Lee and Nelly Furtado just to name a few and has appeared on numerous TV and award shows all over the world. After touring the world as backup singer for Britney Spears on her Circus 2009 World Tour, SOFI joined rock legends Motley Crüe on Crüe Fest 2. Born in Germany and raised within a Greek family, SOFI currently calls Los Angeles home.