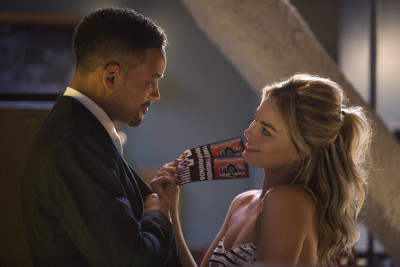 Heist and caper movies rely on manipulating what we see and hear in such a way that we see and hear everything we need to know without realizing that we’ve done so. In spite of some pacing problems and an occasional overabundance of flash (a tricky balance that writer/directors Glenn Ficarra and John Requa don’t always get right), Focus pulls off its caper with a certain amount of verve and panache.

Nicky Spurgeon (Will Smith) is the con man’s con man. If it’s been a con, he’s pulled it off – and better than anyone else. In town for Super Bowl Week, Nicky has assembled a huge crew to pull off small but lucrative cons, pick pockets, and so forth. Then he meets Jess Barrett (Margot Robbie, Wolf of Wall Street), a small-time con artist/grafter with whom he has sufficient chemistry that he introduces her to his crew and she spends the week getting a master class in the art of the con.

After which, his team splits up and Nicky takes in the Big Game with Jess – where they are seated in the box of a wealthy gambler named Liyuan (BD Wong) and things get tense. Following that adventure, he gives Jess her cut and sends her on her way – which she is definitely not expecting (or pleased about).

Cut to three years later and Nicky is working with Rafael Garriga (Rodrigo Santoro), the head of a Formula 1 racing team, to give him an extra percentage of advantage over the other racers in a Big Race in Buenos Aires – where he discovers that Jess is Garriga’s current girlfriend.

The first half of Focus is a whirlwind trip through Jess’ period of education – it’s a fast-paced, spirited romp that pulls us in, dazzling with its sheer audacity. When the movie moves to Buenos Aires, the pace drops off so that next half-hour is mostly set-up (again). This half-hour is made bearable by Robbie and the presence of Santoro and Longmire’s Robert Taylor (using his native Australian accent) as Garriga’s chief competitor, McEwen.

Gerald McRaney also figures into the proceedings as Garriga’s suspicious head of security, Owens. He goes head to head with Smith in a couple of extremely good sequences – intriguing because he’s just as tall as Smith and extremely menacing in demeanor. He steals almost every scene he’s in.

Another standout is Adrian Martinez as Farhad, one of Nicky’s oldest friends and cohorts. Even while we can never quite be sure who’s playing whom between Nicky and Jess, Farhad manages to be on great terms with both sides.

Ficarra and Requa wrote I Love You, Philip Morris and directed Crazy Stupid Love, so there’s a lot of talent there – which is why Focus’ pacing problem is surprising. Fortunately, once the duo get the film back on track for the big finish (with a twist that lives up to the Toledo Panic Button), everything falls into place and Focus pulls back into focus.

Even when the pacing falters, smith and Robbie’s chemistry makes up for a lot – and Robbie’s deft comic turn here shows that Wolf of Wall Street was no fluke. The woman has chops.

At the screening I attended, the audience comments at the end were mostly variations on ‘I did NOT see that coming!’ Neither did I.