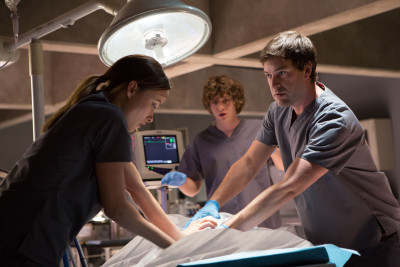 It’s like Frankenstein only working with whole bodies rather than one cobbled together with bits from several. And, of course, it goes horribly wrong.

The team that constitutes Project Lazarus – Frank (Mark Duplass), his fiancée Zoe (Olivia Wilde), slacker Clay (Evan Peters) and computer whiz Niko (Donald Glover) – work in a basement laboratory on a university campus. In a test, they reanimate a dog named Rocky – that seems very aggressive at first but calms down (though the next sequence shows Rocky watching Zoe sleep…).

After their success with Rocky, their lab is suddenly invaded by security and representatives of Big Pharma, who take all their research and the hard drives of their computers. They should probably have looked a little more closely at the deal that provided their financing.

Realizing that they have little time before the company that stole their work goes public, they engage student videographer Eva (Sarah Bolger) to record a last effort to replicate the process – getting it recorded to prove that it was their work that lead to the breakthrough.

In their hurry to get things going, there’s an accident in the lab and Zoe dies. Frank immediately decides that they have to use their procedure on Zoe and bring her back. They succeed…

The Lazarus Effect is a Blumhouse production. It was shot quickly, on a very small budget – sort of like what Roger Corman used to do with his company New World in his heyday. Effects are solid for the budget – some of them couldn’t look better on a blockbuster budget – and the writing, by Luke Dawson (Shutter) and Jeremy Slater (Fantastic Four) is both efficient and just a hair off kilter so that the scares and jump moments don’t quite land where we’re expecting.

The five core cast members turn in equally solid performances. Bolger (The Tudors) is particularly effective as the young woman who is there, essentially, just to observe and record and is stuck unimaginable circumstances from which she is equipped to escape. Duplass also stands out as the scientist who starts out trying to save his work and winds up having to try to save the life of his fiancée.

Director David Gelb – best known for his documentary Jiro Drams of Sushi – brings a real verité feel to The Lazarus Effect even (maybe especially) when things start to go wrong.