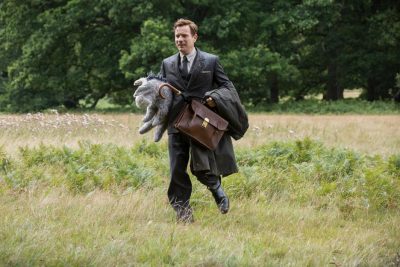 Christopher Robin opens with young Christopher about to go away to boarding school (where the A.A. Milne stories ended) and then, over a number of years, shows us how he went from boarding school to fighting in WWII and taking a position as an efficiency manager for Winslow Luggage.

We also meet his family – wife Evelyn (Hayley Atwell) and daughter Madeline (Bronte Carmichael) – and find that he spends far too much time at work, dealing with crises that could end up with the company having to let go some twenty per cent of its workforce.
Despite promising to head off to Sussex with Evelyn and Madeline, Christopher (Ewan McGregor) is pressured into working through his weekend by his posh boss, Giles Winslow (Mark Gatiss), son of the company’s owner.

When circumstances evolve such that he finds himself sitting on a park bench to avoid a neighbor, he encounters Winnie the Pooh (voiced by Jim Cummings – who’s been voicing the bear of very little brain for almost four decades).

It seems that all of Pooh’s friends have vanished and he needs Christopher Robin to find them. So off he goes to the Hundred Acre Wood (after a bit of fussing and complaining – sounding a bit like a child who is being told it’s time to go home).

Christopher Robin is a delightfully odd and clever addition to the world of Disney’s Pooh tales.

Christopher’s adult life is run by his boss (and Gatiss is superb as the lazy, posh boss who is the closest thing the film has to a villain) – and he seems to have a mantra, ‘Nothing comes from nothing,’ that reinforces his over-diligence at work.

In spite of their relative neglect, Evelyn and clearly love him (Evelyn note’s that Madeline would do anything for him – he’s her hero) – though Evelyn seems ready to make a very un-forties decision if he doesn’t come around.

As for Christopher, once he actually gets to the Hundred Acre Wood, he begins to regain something precious – his sense of fun/play.

McGregor is superb as Christopher – going from subtle nuance to slapstick without either feeling unnatural. Atwell brings a bit of Agent Carter’s iron to Evelyn, to go with her more maternal/spousal feelings.

The voice cast (Peter Capaldi as Rabbit; Cummings as Tigger; Toby Jones as Owl; Sophie Okenedo as Kanga; Sarah Sheen as Roo, and Nick Mohammed as Piglet) – but Brad Garrett’s Eeyore steals every scene he’s in. 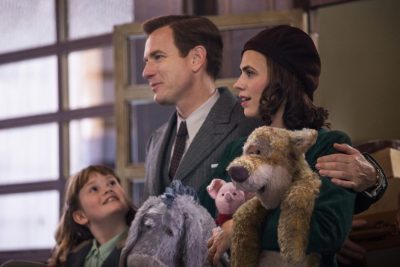 Marc Forster’s direction is pretty as straightforward as you can get. There are no directorial flourishes or indulgences of any kind.

Full marks to the visual effects and CGI artists – the residents of the Hundred Acre Wood really look like the E.A. Shepard drawings from Milne’s stories – mixed with just a hint of the earliest Disney takes on the characters.

The child in me loved Christopher Robin. The idea that we can lose our inner children and then rediscover them is a powerful idea – as are the concepts that while you might work hard, you shouldn’t work so hard that your life becomes a cloudy, rainy day, and that family (including the family you make for yourself) should always come first.