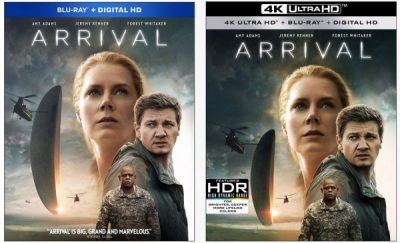 Denis Villeneuve’s Arrival – one of the best films of the year (we have it at #4) – is coming to home video.

One of the best First Contact films of all-time, Arrival is a story about life, language and love.

Paramount Home Media Distribution is releasing Arrival on Digital HD on January 31st and Blu-ray and DVD on February 14th.

ONE OF THE MOST CRITICALLY ACCLAIMED FILMS OF THE YEAR

Five-time Academy Award® nominee* Amy Adams “delivers one of her best performances” (Brian Truitt, USA Today) as expert translator Louise Banks.  When mysterious spacecraft touch down across the globe, an elite team races against time to decipher their intent. As tensions mount between fearful governments, Banks discovers the aliens’ true purpose and, to avert global war, takes a chance that could threaten her life, and quite possibly humanity. Oscar® nominee** Jeremy Renner and Academy Award® winner*** Forest Whitaker co-star in this epic film with “a mind-blowing ending” (Brian Truitt, USA Today) that “you will want to see again and again”(Brian Formo, Collider).

ARRIVAL has been named one of the best films of the year by the American Film Institute, National Board of Review, New York Times, USA Today and many more. In addition, Adams was named Best Actress by the National Board of Review and received Golden Globe® and SAG nominations for her performance.  Screenwriter Eric Heisserer has won the Critics’ Choice Award for Best Adapted Screenplay and received a Writer’s Guild nomination.

The ARRIVAL 4K Ultra HD and Blu-ray Combo Packs include over an hour of engrossing special features, with in-depth explorations of the film’s subject matter, sound, score, editing and more.

The ARRIVAL Blu-ray is presented in 1080p high definition with English 7.1 DTS-HD Master Audio, French 5.1 Dolby Digital, Spanish 5.1 Dolby Digital, and English Audio Description and English, English SDH, French, and Spanish subtitles.  The combo pack includes access to a Digital HD copy of the film as well as the following:

Fans can enjoy the ultimate viewing experience with the 4K Ultra HD Combo Pack, which includes the Blu-ray detailed above, as well as an Ultra HD Disc with the film presented in 4K Ultra HD with English 7.1 DTS-HD Master Audio, French 5.1 Dolby Digital, Spanish 5.1 Dolby Digital, and English Audio Description with English, English SDH, French, and Spanish subtitles. The Combo Pack also includes access to a Digital HD copy of the film.

The Blu-ray Combo Pack and 4K Ultra HD Combo Pack available for purchase include a Digital HD Version of the film that can be accessed through UltraViolet™, a way to collect, access and enjoy movies.  With UltraViolet, consumers can add movies to their digital collection in the cloud, and then stream or download them—reliably and securely—to a variety of devices.