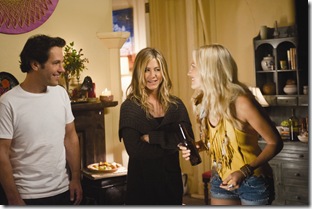 Largely improvised from a base script by director Wain [Role Models] and Ken Marino, Wanderlust follows the lives of New York couple George [Paul Rudd] and Linda [Jennifer Aniston] from their decision to purchase a ‘micro-loft’ [realtor speak for studio apartment] through the financial disaster and the alternative lifestyle they attempt to embrace.

Not long after they acquire their micro-loft, George loses his job, while Linda fails to sell her documentary on penguins with testicular cancer to HBO [‘But it’s March of the Penguins… with cancer! she sputters]. Seeing no alternative, they set out to stay with George’s brother, Rick [Marino] though they spend a night at Elysium Bed & Breakfast on the way. It’s a B&B run by an ‘intentional community’ that includes a wealth of oddball individuals including a cheerful nudist winemaker who’s writing a political thriller [Joe Lo Truglio], a blonde bombshell who seems taken with George [Malin Akerman], and a very hippie-dippy sage [Justin Theroux] who’s so full of himself that he doesn’t realize that he isn’t – sage, that is.

George’s brother, rick, turns out to be a genuine, 100%, dyed-in the wool douche who’s rich and has a beautiful wife, Marissa [Michaela Watkins] who drinks pretty much non-stop and is completely aware of her husband’s philandering. It only takes a few days for George and Linda to get fed up and, since they have no place else to go, they head back to Elysium. George argues for staying; Linda isn’t so sure. George winds up not so thrilled with the lifestyle, while Linda embraces it.

That’s pretty much the plot – except for the addition of some developers who want to turn the Elysium land into a casino/hotel complex, and the need for Elysium’s co-founder, the semi-senile, wheelchair-bound Carvin [Alan Alda] to find the deed to the property before they can start building. 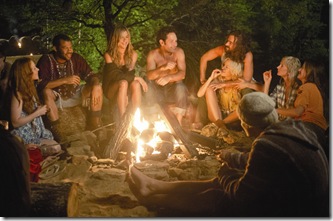 Like most Apatow productions, Wanderlust is a comedy that works because its cast takes a funny script and runs with it. In this case, most of the jokes work, in spite of being variations of familiar gags, because the cast is engaging and the timing is such that we never no, for sure, when they’re going to riff.

One of the funniest sequences is just Rudd, riffing in front of a bathroom mirror. It’s profane and sweet, simultaneously – and funnier than anything we’ve seen since the best comedies of last summer [Bridesmaids, Horrible Bosses, Crazy Stupid Love]. But the real surprise is the way Aniston jumps in and just lays it all out there [which shouldn’t be a surprise after Horrible bosses, but there you are]. It may be a bit of a shock, but Wanderlust is Aniston’s second good movie in a twelve month span.

Of course, in a comedy like this, a lot of gags don’t land, or a good riff gets run into the ground. Where Wanderlust, like Bridesmaids, succeeds is in the ratio of good to awful. Only about a quarter of the gags don’t work.

It doesn’t hurt that the cast – which also includes great moments from Lauren Ambrose, Kathryn Hahn, and Linda Lavin [as George and Linda’s realtor, Shari], among others – has great chemistry and is having a lot of fun themselves.

Somehow, Wanderlust seems to have been traveling under the radar, so far. Industry experts are saying it’s going to bomb. That would be a shame. It’s delightful.