Entertainment News for The Rest of Us
Brian Sittner
Music 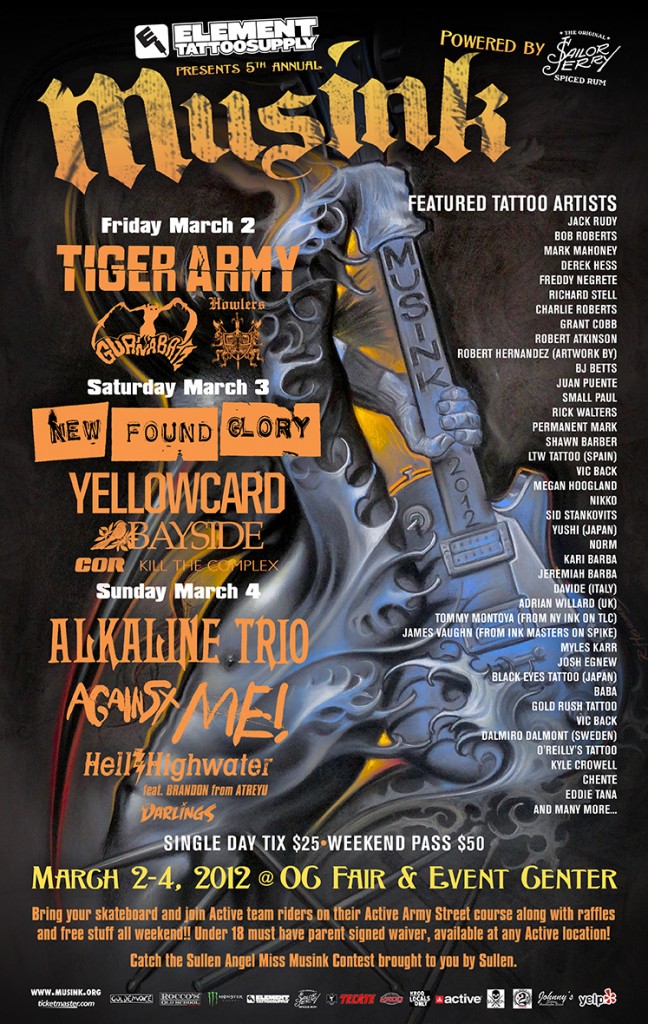 March 2nd, 2012 marks the date for a fun weekend in Orange County, California filled with a huge list of music and tattoo artists; hence the name Mus-ink. Musink begins on March 2nd, 2012 and will end on March 4th, 2012. The event will include bands such as New Found Glory, Yellowcard, Tiger Army, and tattoo artists Jack Rudy, Bob Roberts, Freddy Negrete, and Richard Stell to name a few. More details from the press release after the jump:

February 15, 2012 – Los Angeles, CA – Southern California’s premiere tattoo and music festival, MusInk 2012, will celebrate its 5th year in Orange County on March 2-4 at the OC Fair & Event Center in Costa Mesa, CA, with performances by Tiger Army, New Found Glory, Alkaline Trio, Against Me!, Yellowcard and Bayside among others and appearances by legendary tattoo artists Jack Rudy, Bob Roberts and Mark Mahoney to name a few.  Tickets are on sale now at Ticketmaster.com (http://bit.ly/yoyOO7).

Thousands of ink clad music fans from around the world will descend upon Orange County, California, a mecca for tattoo and music subcultures, on March 2-4 for one of the region’s most anticipated events.  Celebrating its 5th year, MusInk will return bigger and better than ever with performances from some of punk rock’s elite bands and over 300 tattoo artists.

“Our 5th year anniversary shaped up to be a truly great event,” says promoter/founder Bill Hardie.  “We are extremely happy with the quality of tattoo artists and bands that are participating this year.  We are looking forward to introducing music fans to our incredibly gifted tattoo artist and tattoo enthusiasts to our amazing talented bands.  Tattoos, music, skateboarding, model contest, cocktails…that’s a good day for anyone!”

No stranger to MusInk, Southern California’s beloved dark rock trio Tiger Army will headline the opening night of the festival, kicking it off with a thunderous roar.

“Tiger Army played the first MusInk in 2008 and there was an amazing energy from the crowd, I expect nothing less this time,” says frontman Nick 13.  “Orange County is a perennial favorite for us to play with some of our most devoted fans anywhere, but that also means we have to give as much as humanly possible to try and top ourselves — I want that person with a Tiger Army tattoo who’s seen us a dozen times to walk out feeling that they’ve just seen us play our best show yet.”

With over 11,000 people in attendance at last year’s festival, which featured performances by Suicidal Tendencies, Biohazard and Thrice, MusInk has established itself as one of the region’s hottest events and 2012 is shaping up to the its best year yet.  Don’t miss out!