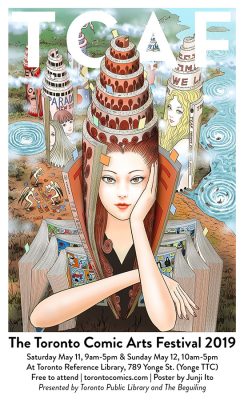 Ito-sensei will debut his new horror short story collection Smashed: Junji Ito Story Collection at the festival – and will take part in a number of events.

The Toronto Comic Arts Festival 2019 runs the weekend of May 11-12. Details follow. 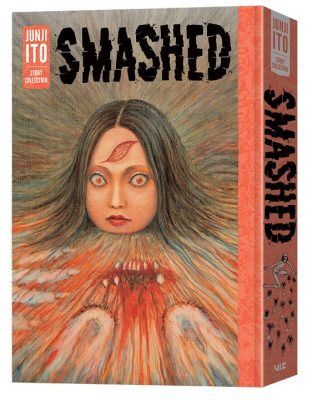 The Master of Manga Horror makes his first North-American appearance in Toronto, Canada, this May 11-12.

FEBRUARY 11: TCAF, The Toronto Comic Arts Festival is proud to announce that acclaimed Japanese manga creator and international horror sensation JUNJI ITO will participate in TCAF as a Featured Guest and Official Poster Artist of the 2019 Festival, to be held May 11-12, 2019, in Toronto, Canada. Junji Ito is best known for his groundbreaking horror stories including Uzumaki, Gyo, Tomie, and “The Enigma of Amigara Fault,” and will travel to Toronto in support of his new short story collection Smashed: Junji Ito Story Collection, to be published this April by VIZ Media.

“Junji Ito is a truly amazing creator, and we’re so proud to welcome him the Canada,” said TCAF Artistic Director Christopher Butcher. “Ito-sensei is a creator that we’d been hoping to feature at the Festival for more than a decade, he’s a personal favourite manga-ka of mine and of so many fans and comic creators. We’re so happy that he could find some time in his busy creative schedule to attend the Festival this year.”

Junji Ito will debut the new horror short story collection Smashed, the latest in an impressive line-up of great collections of his work in English. In the last 5 years horror fans have been treated to an incredible wealth of Ito’s material, including new hardcover deluxe editions of Uzumaki, Gyo, and Tomie, and all-new collections including Frankenstein, Shiver, and Fragments of Horror, among others, all available from VIZ Media.

“Ito-sensei’s work crosses so many traditional comics boundaries, and he has such a wide and enthusiastic audience for his work,” continues Butcher. “Whether it’s horror fans, comics fans, manga fans, or anime fans, there are so many people that count Ito among their favourite creators in the world, thanks to the omnipresence of his work across popular media including manga, film, and anime. I know that meeting Ito-sensei will be a treasured memory for many visitors to TCAF.”

Junji Ito will participate in a wide variety of events at TCAF 2019, including an on-stage interview, live-drawing, and special ticketed autograph sessions (details To Be Announced). The full range of Ito-sensei’s in-print manga will be available for purchase on-site at TCAF at the Festival Shop, Page & Panel, and at his events courtesy of Festival Sponsor The Beguiling. Ito-sensei’s works are also well-represented in the circulating collection of Festival Presenting Sponsor Toronto Public Library.
—
Stay In Touch!
Junji Ito will join more than 350 exhibiting creators and publishers for The Toronto Comic Arts Festival 2019, with many more guests still to be announced! Visit TCAF online for up-to-the-minute updates!
Website: www.torontocomics.com
Twitter: @TorontoComics
Facebook: www.facebook.com/TorontoComics
Tumblr: torontocomics.tumblr.com

ABOUT JUNJI ITO
Junji Ito made his professional manga debut in 1987 and since then has gone on to be recognized as one of the greatest contemporary artists working in the horror genre. His titles include Tomie and Uzumaki, which have been adapted into live-action films; Gyo, which was adapted into an animated film; Fragments of Horror, adapted into an animated series; and the short story collections Shiver and Frankenstein, with all works having been published in English by VIZ Media. Other works of Ito’s in English include Dissolving Classroom, published by Vertical Inc., and Junji Ito’s Cat Diary: Mon & Yu, published by Kodansha Comics. Ito’s influences include classic horror manga artists Kazuo Umezu and Hideshi Hino, as well as authors Yasutaka Tsutsui and H.P. Lovecraft.

ABOUT SMASHED: JUNJI ITO STORY COLLECTION
Thirteen chilling nightmares, presented by the master of horror! Try not to be noticed when you eat the secret nectar, otherwise you’ll get smashed… What horrific events happened to create the earthbound—people tied to a certain place for the rest of their short lives? Then, a strange haunted house comes to town, but no one expects it to lead to a real hell… Welcome to Junji Ito’s world, a world with no escape from endless nightmares. Hardcover graphic novel coming April 16, 2019, from VIZ Media.

ABOUT TCAF
The Toronto Comic Arts Festival would not be possible without the assistance of our sponsors and partners, including presenting sponsor Toronto Public Library and primary sponsor The Beguiling Books & Art.

TCAF is produced with the support of the City of Toronto through the Toronto Arts Council.

We would also like to acknowledge funding support from the Ontario Arts Council, an agency of the Government of Ontario.

We acknowledge the support of the Canada Council for the Arts. / Nous remercions le Conseil des arts du Canada de son soutien.
Seneca College is a proud Sponsor of TCAF 2019.

TCAF would like to thank Festival sponsor VIZ Media, and Shogakukan Inc., for their support in arranging Junji Ito’s trip to Canada.

Sponsorship opportunities for TCAF 2019 are still available, please email us at: contact@torontocomics.com for more info.