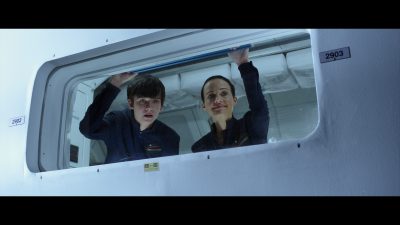 Talk about an awkward teen romance!

The film opens with Elon Musk-type Nathaniel Shepherd (Gary Oldman) giving a speech at the launching of the first permanent mission to Mars – six astronauts are about to set up the first Mars colony, East Texas.

Four months after the mission begins, Gardner is born – but his mother (Janet Montgomery) dies in childbirth. Gardner’s presence is covered up and he is raised by the scientists of East Texas – which come to include Kendra (Carla Gugino), who acts as his surrogate mother.

His only friend is a robot he helped build, called Centaur (voiced by director Peter Chesholm), but he does manage to make contact with Tulsa (Britt Robertson), a girl from Colorado. Tulsa has some issues – her current foster parent is only in it for the monthly check, among other things – but there’s something about Gardner that makes him the only person she knows that she doesn’t hate.

When the opportunity arises for Gardner to visit Earth – a project that includes having his bones supplemented with metallic supports through several operations, and a ton of training – he finds a way to sneak away (raised by scientists!) and seeks out Tulsa.

She, of course, is both pleased to see him and pissed that he hasn’t been in contact for seven months! He does note that ‘some travel was involved.’ Together, they set out to find Gardner’s father. The only clue they have is a photo Gardner has of his mother – with a man he thinks must be his father.

There’s a series of misadventures that lead to that house – with NASA and the police in hot pursuit – and a fateful meeting.

The Space Between Us is basically a teen romantic drama with the biggest obstacle between two crazy kids falling in love being that he’s from Mars – literally.

Although we see Gardner watching Wim Wenders’ magnificent Wings of Desire (about an angel who falls in love with a mortal woman on Earth), it seems like he hasn’t seen too many more movies because his reactions to things on Earth are probably the most extreme things about the film (the best double-take being his seeing a horse for the first time). 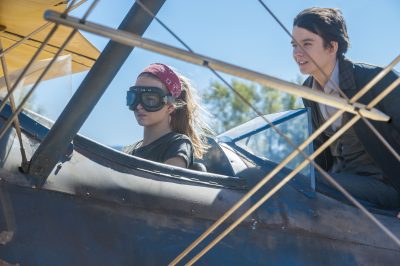 Robertson may be a bit too old to be playing a high school student, but she does a lovely job of playing Tulsa – her delight in Garnder’s innocence and her less delightful responses to everyone/everything else feel very adolescent and very true.

Primarily, though, we buy The Space Between Us because Butterfield’s Gardner is a delightful innocent – constantly being wowed by things on Earth (‘There are so many colors!). We completely understand why he asks everyone he meets, ‘What’s your favorite thing about Earth?’

Chesholm seems more interested in allowing the characters to show who they are than in filling the screen with implausible action sequences (though there are a couple of those – one involving a biplane is fairly exhilarating). Instead, he keeps the pacing and energy just low-key enough that we can buy the characters and their situations without too much trouble.

The Space Between Us may not be a blockbuster, but it is effective teen romance with just enough science fiction to keep it feeling fresh.