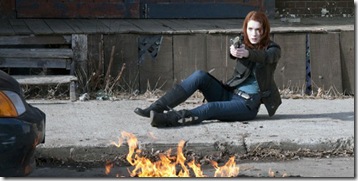 Is there a better month of the year for monster movies than October? Of course not! Which is probably why Syfy is premiering two primo wolf-based Saturday night screamers: Red: Werewolf Hunter [starring Felicia Day, pictured above, in action] and Monsterwolf. Monsterwolf premieres on October 9th and Red: Werewolf Hunter debuts on October 30th – the night before Hallowe’en.

Red (Day) brings her fiancé home, where he meets the family and learns about their business — hunting werewolves.  He’s skeptical until bitten by a werewolf.  When her family insists he must be killed, Red tries saving him. Red: Werewolf Hunter also stars Kavan Smith (Stargate Atlantis) and Stephen McHattie (Watchmen). Red: Werewolf Hunter is produced by Angela Mancuso and Vesuvius Productions in association with Chesler Perlmutter Productions.