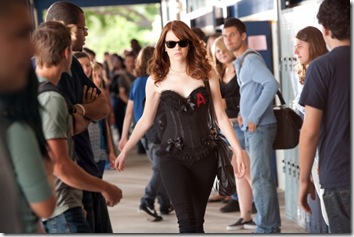 Easy A is a witty, literate [witerate?] movie that belongs to that class of teen comedies that includes Clueless and Mean Girls. Unlike Clueless and Mean Girls, it’s not, strictly-speaking, an adaptation/update of a book. Instead, it’s a funny, smart, slightly more of a  smartass/wiseacre of a film that depends on aligning events in the life of its lead character with events from the novel The Scarlett Letter.

Olive Pendergast [Emma Stone] is a solid student whose girl next door looks and wit that’s sharper than razorwire seem to be keeping her below the radar – so far, in fact, that after a whirlwind weekend of oldies, painting the dog’s toenails and listening to her birthday card from grandma, Olive tells her best friend, Rhiannon [Aly Michalka]. Unfortunate, before you can say cell phone, calls and texts have trumpeted the totally false rumor around the school – and the born again Marianne [Amanda Bynes] has made Olive he next project.

As Olive fakes having sex with various guys [gay Brandon, a nerd, even a fat guy whose stock rises shortly afterward, the worst thing happens – she is ostracized. Even Rhi dumps on her [and dumps her]. 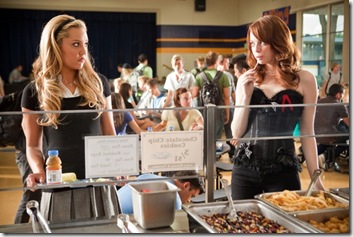 In the meantime, there is a prince charming of sorts in Todd [Penn Badgely], the school mascot [became the Woodchuck after Marianne and buddies petitioned against Blue Devil]. And Olive has the most understanding, understanding parents in the world: Dill [Stanley Tucci] and Rosemary [Patrica Clarkson] – one was gay for a while and the other slept with most of her high school – though mostly boys!

As Olive’s ostracision grows, her English class is studying The Scarlet Letter and the parallels between Hester Pryne’s treatment and Olives become recognizably similar. In response, Olive embraces her status as a slut, showing up at school in jeans and bustiers adorned with a red A on one shoulder.

There are two events that show Olive – in no uncertain terms – that what’s happening to her is worse than anything Hester Prynne went through because she’s suffering consequences she doesn’t actually deserve.

Will Gluck did a great jog of pacing Bert V. Royal’s sharp, snappy script. The result is a movie that will slay you whether hitting high school for the first time or having long since abandoning those alledgedly hallowed halls.

Before she’s done, she’s given at least one student implicit agreement that she can be had for cash – which is not the case. And though the long talk with her mom gives both support and terror,it forges the link to the live webcast that was actually framing the tale – complete with signage. And there is the matter of that sports mascot…

It’s pretty simple here, folks, Easy A is a smart, energetic, wonky tale of teen who got herself a bad reputation, took advantage of it, and then did the smart thing and ‘fessed up – in style, over the internet For all too see.

Easy A doesn’t waste time spelling things out. It works from the idea that moviegoers are smart and will understand it. It also belongs on a very short list of great teen comedies, including Mean Girls and Clueless – and the likes of Legally Blonde.