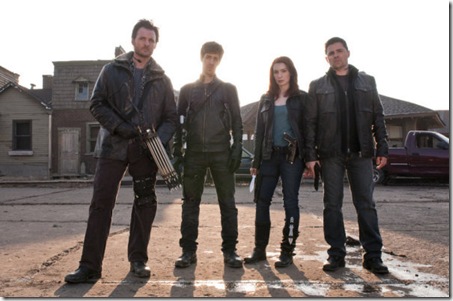 Most of Syfy’s Saturday night original movies are fun in that cheesy, ‘50s sci-fi/horror, B-movie kind of way. Some are brilliantly campy and others are just plain awful. This Saturday’s Red: Werewolf Hunter [9/8C] is one of their best. Part of the reason is that the writing is smarter; part of it is that it has a pretty decent cast. The key element is the star – Felicia Day [The Guild, Dollhouse, Dr. Horrible’s Sing-a-long Blog] plays Virginia ‘Red’ Sullivan, the latest in a long line of werewolf hunters.

Red opens with a scene from the past that sets the stage for introducing Virginia, who’s bringing her fiance´, Nathan [Kavan Smith, Stargate SG-1, Eureka], home to meet her family – surly brothers [Jake [David Peale] and Marcus [Greg Bryk] and sweet but guarded grandmother [couldn’t find a credit]. When they call her Red, he asks if it’s because of her red hair. She says no, it’s family thing. Then, with grandma’s permission, Red tells Nathan about her heritage. To say he is credulous would be an understatement.

Almost immediately, trouble arrives in the form of Xavier, leader of the one werewolf pack with which the hunters have a truce. Before he dies, he gasps out the name of his killer – Gabriel [Stephen McHattie] – and it’s not long before Nathan realizes that his beloved is telling the truth. Then comes the big news – Gabriel can change at will! Not only that, but he plans to teach the pack how to do it, too [with unpleasant consequences for any who fail]. Naturally, all sorts of complications ensue – including Gabriel using unusual means to increase the size of the pack.

One of the problems with reviewing from a rough cut is that you don’t get a feel for the quality of the effects [CG and practical]. Another is that there could be last minute revisions/edits.

Judging from the screener, though, Red: Werewolf Hunter is fast-paced, filled with action and pretty intelligently put together. It also helps that McHattie plays the villain. He has a knack for choosing the most unexpected ways to play a character and here he is almost a ‘50s hipster, with his snap-brim fedora [narrow brim] and loose-limbed grace.

There are some campy moments [Red shooting harpoons at the bad guys!] but, for the most part, Red: Werewolf Hunter is played in a straightforward manner. Brook Durham’s script [from a story by Angela Mancuso] approaches the idea of a line of werewolf hunters with an earnestness that goes a long way toward making the film’s low budget a null factor.

Sheldon Wilson keeps things moving. Most of the film is action, though there are sufficient character moments to make actions and consequences provide impact. He definitely makes the most of his budget – and for all the film’s earnestness, he does give the few genuinely campy moments a few more beats that you might expect. The result is a cool B-movie that could even spawn a sequel – or even a series [should ratings be high enough to persuade Syfy].