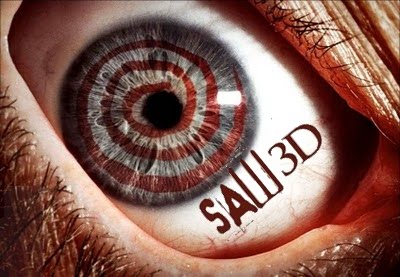 It’s funny, sometimes running Eclipse I end up feeling like a proud mother. Whenever one of the EM Writers goes on to bigger and better things and movies that we “discover” go on to do great things like winning awards or becoming box office wonders. I feel a strange since of pride in those successes.

The SAW Franchise recently got the Guinness book of world records award for the highest grossest horror franchise in history.  Having earned $1 billion at the box office over its long 7 year run. Not bad for a franchise that really was supposed to be a one and done affair (two movies tops). In a small way it all started with EclipseMagazine, we were one of the first news outlets to interview the franchise creators – Leigh Whannell and James Wan months before the first SAW came out. Now 7 years later we are at the end of the road.

The original SAW was a groundbreaking movie that featured one of the most intense and best third acts I’ve ever seen committed to film. I actually had it as one of my top 10 films the year it came out – due in large part to that genuinely shocking third act. The franchise has been trying to duplicate that third act thrill ride ever since and has never been able to live up to the mouth gaping awe the first one provided audiences. I literally screamed WTF about four times during the original Press Screening.

It’s funny, I interviewed the folks behind the first SAW movie and in a bit of irony met Cary Elwes and Betsey Russell for the final movie; A strange kind of synergy and closure there. I’m not sure I was excited to see Cary return as Dr. Gordon to the franchise or not. During our Q and A session he led us to believe that he had a major part in the finale and in a way he does but not as big as one would think.

The problem with the last few SAW films is once Det. Mark Hoffman (Costas Mandylor) was revealed as being the new Jigsaw (Tobin Bell) the movie franchise forgot what got us there. The last few movies were more about Hoffman trying to cover his own butt than Jigsaw trapping people and forcing them to make impossible “choices.” I never got the sense that Hoffman really believed in Jigsaw’s “teachings.”  He came across as just a psycho. His motivations were never properly explained (again beyond just trying to stay ahead of Internal Affairs and his fellow cops).

SAW 3D: The Final Chapter is all about him trying to get Jill Tuck (Betsy Russell) the last person who knows his secret. The traps are all secondary and the people he kidnaps don’t even really matter until 30 or 40 minutes into the movie and by then you don’t care. SAW was at it’s best when the movie started with the victims and each victim’s “crimes” were detailed as the movie progressed. You actually got to know these people – and in most cases “hate” them. But here, everyone is pretty random until we’re introduced to a guy who wrote a book about surviving Jigsaw’s trap.  When Hoffman finally takes him, it felt so self-serving.

All the talk from the producers about how this version was going to be 3D and we would see the most inventive traps yet?  I’ll admit, I didn’t waste my time with the 3D version, but from what I watched there didn’t seem to be a single trap that was specially designed for “3D,” or made me go “Wow, I wish I splurged on the 3D!” Clearly the Producers seem to have run out of ideas because they recycled the Head Gear Trap from the original SAW several times here.

The inevitable twist ending and big reveal, didn’t feel like a twist at all. As a matter of fact this is the 3rd time they’ve done this ending and it makes no sense. It’s as if they just filmed the same montage sequence three times with three different people.  How can they all be working for Jigsaw, delivering the same information and kidnapping the “same” people? Clearly the Producers have no more ideas for this franchise. It’s a good thing they are ending the way they wanted to. To bad its not an ending fans will enjoy or deserve.