Phiona Metusi is a Ugandan girl who rose from the slum/ghetto town of Katwe in Uganda to become a champion chess player.

Her story – as adapted for film by writer William Wheeler and director Mira Nair – rising above the clichés of ‘the sports story’ by virtue of being true and being adapted with both precision and love. It is as close to a flawless film as I’ve ever seen.

Phiona (Madina Nalwanga) sells maize (corn) to help her family get by. One day she follows an acquaintance and discovers a group of children who are learning to play chess by Robert Katende (David Oyelowo) as part of the Sports Ministry Outreach.

She learns the game and is soon beating everyone in the group. Katende finds a way for his kids to play in a tournament and persuades Phiona’s mother, Nakku Harriet (Lupita Nyong’o), to let her go – and Phiona wins. Eventually she is invited to a prestigious tournament in Moscow – where she faces losing for the first time.

Normally, a story – even a true one – that hits all the usual beats can feel tired. Queen of Katwe does not, primarily because of its faithfulness to its characters.

While Phiona is learning and growing as a chess player, her older sister, Night (Taryn “Kay” Kyaze), is hanging with Theo (Maurice Kirya) – the epitome of a ‘wrong guy’ – and more concerned about appearances than substance. Her younger brother, Richard (Ivan Jacobo, then Nicholas Levesque) is a more vulnerable kid who also takes to chess –though he’s not as good as his sister.

Harriet is a smart, perceptive, stern but not unloving mother who can be a storm if she or her family is disrespected (her opinion of Theo is borne out later in the film).

Katende is a kind, giving man who only takes the job with Sports Ministry Outreach because he cannot find work as an engineer – then becomes totally committed to his Pioneers. His wife, Sara (Esther Tabandeke), is completely supportive – even though it’s her teacher’s salary that is their main source of income.

It is his contention that chess teaches one how to plan – and that making a plan can help elevate your life. This is an idea that Phiona takes to – slowly at first. 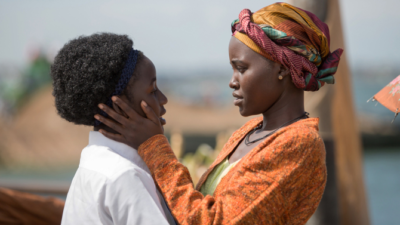 Then there’s the other main Pioneers –Brian (Ethan Nazario Lubega), Gloria (Nikita Waligwa) and Joseph (Edgar Kanyike) – who become a second family for Phiona after a less than auspicious beginning. In their first tournament, they are much younger than their opponents, resulting in some strange moments.

Another key factor is the environment – Katwe may be a poverty zone, but it’s colorful and the people are fighters (when a man greets her with ‘Hi, Phiona. How’s your life?’ her response ‘Fine!’).

In her first role, Madina Nalwanga is amazing as Phiona. She captures the joys and sorrows of her character’s life shifting from a not quite neutral solemnity to bubbling with happiness; dissolving in tears and even getting a bit bratty and cocky because she thinks her talent should be more appreciated. As a fighter, she does not take her losses well, whether on the chessboard or in life.

She is so determined to learn the game as well as she can that she learns to read so that she can study books on chess – burning precious paraffin in the process. When she promises her mother that she will get her a house, we completely believe her. 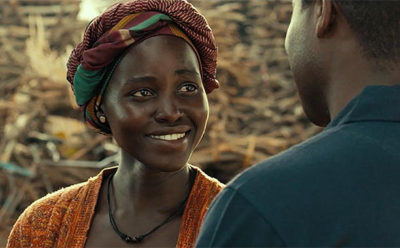 Nair shot much of the film in a neighboring town to Katwe and you just can’t buy that kind of authenticity. She also knows that too much onscreen chess could be boring for most people, so she gives glimpses of the moves while focusing on the players’ faces during matches – we can see how a match is going by their reactions.

She never forces the pace either. Queen of Katwe is a story that deserves not to be rushed and Nair keeps the pacing appropriately deliberate – without ever becoming boring.

In a world where people are in awe of Disney for buying Pixar, Lucasfilm and Marvel, it’s good to know that the studio still produces G-rated family films like Queen of Katwe and the criminally underseen MacFarland U.S.A.

Queen of Katwe is a spellbinding film that makes its true story a source of joy for anyone who should take the time to see it.