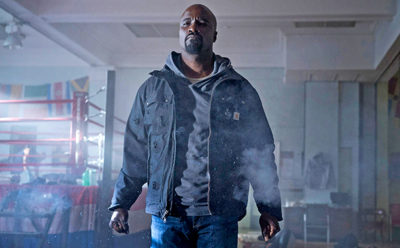 There’s a swagger and a musicality to Netflix’s Luke Cage that isn’t present in the streamer’s other Marvel series – hip hop is not just used to good effect, it is integral to the show’s rhythms and even figures in the episode titles.

It uses tropes from both superhero comics and films and what has been labeled Blaxploitation – sometimes counterintuitively. And it’s the most entertaining of Netflix’s Marvel shows – even as Says Stuff.

Despite using some familiar tropes, Cheo Hodari Coker’s Luke isn’t Blaxploitation. In fact Coker has said there’s no such thing – what others labeled Blaxploitation was simply films that allowed black Americans to see themselves in in the movies in the same way whites have always seen themselves in movies (I’m paraphrasing here). They could be heroes and villains; cop and robbers; victims and victimizers – they could be anything, and that was the first time that had happened to any real degree, and impacted the art form.

I look at what he said and think that if you were to make Shaft with an all-white cast (with an appropriately adjusted script), it would be called ‘noir’ – not whitesploitation. Point to Coker. So if in Luke Cage he uses tropes from what we have called Blaxploitation that’s kind of like calling us on our bull$#!+! labeling – with a serving of waka-waka guitar.

The fact that Luke Cage is the most entertaining of Netflix’s Marvel series is wonderful but it has things to say – and says them just as well. 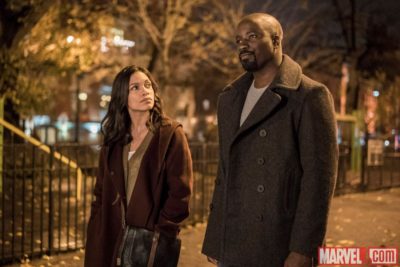 Luke (Mike Colter) has moved to Harlem from Hell’s Kitchen to lie low and get his head together. He keeps a roof over his head by sweeping hair at Pop’s Barbershop during the day and washing dishes at Harlem’s Paradise evenings.

The barbershop is the neighborhood’s Switzerland – neutral ground where all are welcome and within whose confines, co-exist in peace. The club is like a modern Cotton Club – where the cool hang out and listen to great music (Raphael Saadiq, Charles Bradley, Faith Evans, D-Nice and Jidenna all appear in eps), and enjoy each other’s company – and where’s there’s always a hint of danger lurking behind the curtains (or the velvet rope) leading to the VIP section…

The show’s score is provided by Adrian Younge and A Tribe Called Quest veteran Ali Shaheed Muhammad, but the series’ theme music and guest performers aren’t the only link to hip hop history – every episode title comes from a Gang Starr song title and that painting hanging in cottonmouth’s office is Biggie Smalls wearing a crown at a jaunty angle.

Other references abound, from Ralph Ellison’s Invisible Man to Walter Mosley and Donald Goines and Ta-Nehisi Coates (who is not name-checked because he’s writing Black Panther!). An ongoing discussion at Pop’s is whether Shaft or Kenyatta is the bigger hero; there’s a list of white guys who would be included on the rarified list that would get free haircuts (Pat Riley and Phil Jackson are on that list).

Luke is an escaped convict and framed – as in the comic – who gained superhuman strength and apparent invulnerability from a prison experiment that might have killed him – but was the only way to save his life (episode four gives us his backstory and even pokes fun at the comics version’s original costume). In the meantime, he’s keeping his head down and maintaining a low profile. 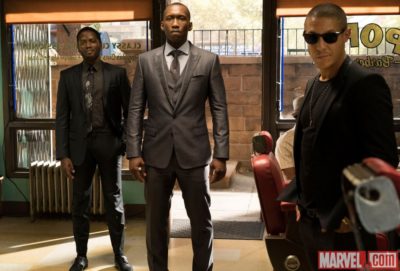 The Harlem crime scene is dominated by Cornell ‘Cottonmouth’ Stokes (Mahershala Ali). His cousin, Mariah (Alfre Woodard) is the district’s councilwoman – and as corrupt as her cousin. Each has a vision of keeping Harlem Harlem, but each goes about it in a different way (though Cornell does use a lot of his ill-gotten gain to finance her future for the district).

Like those mislabeled movies Coker referred to, Luke Cage features a black hero, black villains and a whole lot of black regular people. When the $#!+ hits the fan, it’s because one of Cornell’s men takes liberties and a terrible violation occurs.

Then, and only then, does Luke heed Pop’s admonition that he should be using his abilities to help. And that leads to all kinds of complications.

Then there’s Detective Misty Knight (Simone Missick). Before they know who the other is, the pair get together when Luke substitutes for a bartender at Harlem’s Paradise. After that, things get weird.

Knight is a determined cop who plays by the book. Her partner, Detective Scarfe (Frank Whaley) – the only key white role in the series – seems to be a bend the rules kinda guy – quick with a witty quip (that never reaches his eyes). The pair do work well together, though. Their banter is a familiar kind of anchor for audiences (until it’s not) and they get a pretty juicy arc. 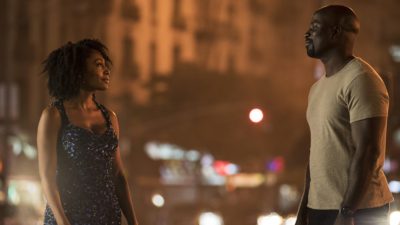 Misty is not quite the character from the current comics, where she started out a detective and rapidly become a bit of a superhero herself. The intelligence and determination are there, but Luke Cage takes place in a world where she is not super – just really good at her job. Maybe in season 2…?

When Luke begins to hit his stride and take part, he is braced with the statement, ‘You’re bulletproof. Harlem is not.’ There’s nothing like a strong woman making a statement like that to keep a guy humble (though Luke is a very humble guy to begin with…).

Just by existing in its current form, Luke Cage is making a statement –like the thought behind Black Lives Matter, the show emphasizes the worth of black culture, black music and black human beings. Luke’s ‘costume’ of a grey hoodie is more than a little subversive and the show is filled with little details like that – the Malcolm X Blvd. street sign in the opening credits is another of them; the fact that Misty’s boss is a black woman is yet another – that make us aware that show is aware of the black reality in America.

Probably the biggest statement is to simply have a bulletproof black man as the series lead – a reminder of the many black lives lost to bullets over the course of American history.

And I haven’t even mentioned the compelling, calmly menacing presence of Shades (Theo Rossi) – sent by the one man Cornell fears, Diamondback (Erik LaRay Harvey), to help him out when Luke starts making things go sideways for him. Or Frankie Faison’s excellent work as Pops, and Ron Cephas Jones as Bobby Fish – a chess wiz who plays all comers at Pop’s Barbershop.

The superheroic bits – Luke facing off with various bad guys (there’s a lovely callback to Daredevil’s brawls in hallways in an early ep) – are barely enough to let Luke Cage qualify as a superhero series and seem to occur against the grain of the rhythms of the show.

All of this wouldn’t work so well if the lead wasn’t spot on, and Colter is superb. Watching him you can believe that a large black man could be more or less inconspicuous. You can also believe it when he explodes, or gives a moving memorial at a funeral (yes, people die -that’s life). 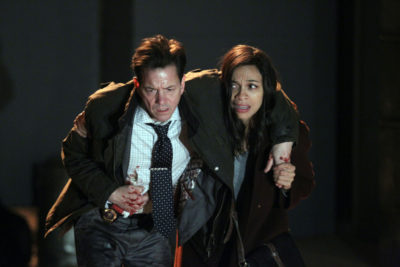 He can be light and fun (his flirtation with Misty in the first ep is priceless) and as dark and gritty as he needs to be. His range – in combination with great writing – makes everything else work.

As a newly retired white guy (who remembers when Brazil nuts and black licorice jelly babies were called something rather less cool as a matter of course), I’m always thrilled when something comes along – book, comic, TV series, movie, whatever – that features lead characters who are not white. There’s always the hope that they will help counter ingrained prejudices that were entrenched in the subconscious when it was so young and open and vulnerable.

Luke Cage is one of those events. It’s a brilliant series (based on the first seven episodes, at least) and mixed in with the drama and superheroics it Says Stuff without needing a hammer and tongs approach.

Best of all, it’s really, really entertaining. So, cool on all fronts…