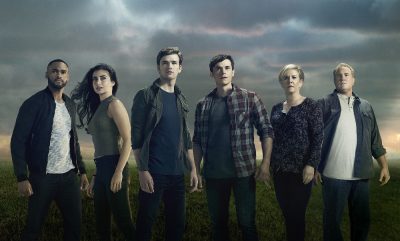 At New York Comic-Con 2017, today, Freeform announced that the second season of Beyond would debut on January 18, 2018 with a two-episode premiere – following a sneak peak on December 28th.

The network also released a video of the opening scene of the second season premiere.

Freeform Announces Premiere Dates for Season 2 of ‘Beyond,’

“Beyond” kicked off the Freeform Super Sci-Fi panel by announcing that season 2 of the series will premiere on THURSDAY, JANUARY 18, 2018, at 8 p.m. EST, with a two-hour premiere. Additionally, in anticipation of the season premiere, the network will air a 30-minute extended sneak peek of the upcoming season on THURSDAY, DECEMBER 28, at 10:30 p.m. EST, presenting viewers with behind-the-scenes secrets and a special look at what’s to come.

The network debuted a special first look at the eagerly awaited new season and executive producers Adam Nussdorf, David Eick and Tim Kring revealed that this year would focus on Holden’s struggle whether or not he wants to embrace his powers and the consequences of his actions during the last season. The producers were joined by series stars Burkely Duffield (“Holden”), Dilan Gwyn (“Willa”) and new series regular, Eden Brolin (“Charlie”), who teased their characters’ love triangle will only get more complicated.