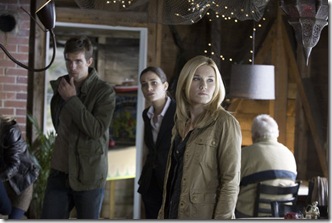 After a myriad of hints/clues/events from Haven’s [Syfy, Fridays, 10/9C] series premiere, Welcome to Haven, culminated in the events of the season one finale, Spiral, it’s easy to believe series creators Jim Dunn and Sam Ernst when they claim to have seven seasons worth of mythology thought out for the series. The second season premiere, A Tale of Two Audreys begins immediately following the events of Spiral and continues to confirm that this is one well planned show.

A Tale of Two Audreys begins with a recap of the key elements of season one, including the complete sequence that introduced the second FBI Special Agent Audrey Parker [Kathleen Munroe] – a scene in which Audrey 2 [for want of a better differentiation] went through the same, exact, word for word sequence as Audrey 1 did in the series premiere.

In the second season premiere, after opening with a scene of blood gushing from the lawn sprinkler in front of ‘The Rev’s [Stephen McHattie] church, Nathan [Lucas Bryant] and Audrey [Emily Rose] cuff Audrey 2 and have barely gotten her into the back seat of Nathan’s vehicle when it begins to rain frogs.

Not being aware of the earlier water into blood thing, they assume that, since the rain of frogs began when Audrey 2 arrived, she must be causing it. Before they can get her back to the station, they get a call to an accident – caused by the frogs. One of the drivers had taken off – no doubt because he was drinking while driving – and after a couple more weird events, the Audreys put together that the plagues are moving in a certain direction. They appear to following the missing driver from the accident!

Elsewhere, after witnessing the sprinklers of blood, Duke [Eric Balfour] returns to his ship to find a gorgeous black woman waiting for him. Her name is Evidence ‘Evvie’ Brown and she has an completely unexpected connection to the ‘entrepreneur.’

While Haven got off to an okay start in season one, quality-wise, it was more remarkable for its potential than for its actual premiere. Over the course of the season, it built up some momentum as events played out and things came together – both in terms of character development and the layering of mythology. The weird events that were caused by various of Haven’s townspeople may have played out in the foreground, but in the background, connections were being made and details were being planted to lead to key revelations – like the matter of Nathan’s parentage, and the death of chief Wournos.

A Tale of Two Audreys is structured in much the same way – the problem of the Biblical ten plagues of Exodus lead to one ‘troubled’ individual, but in the background, events are leading up to a key conversation between the titular Audreys –a conversation that is beyond key.

As with Spiral, suddenly it’s possible that everything we know about one of our lead characters could be wrong – and another has a backstory that both plays into and against what we know of them.

The screener for Two Audreys was rough cut that contained no credits, but it would seem likely that series creators Dunn and Ernst wrote the season premiere. I have no idea who directed. After Spiral, though, it is the best episode of the series, so far.

There’s less pure exposition than usual – and this is a series that requires a certain amount of exposition every time out – and the character development continues in its specific pace. Revelations, big and small, are timed to maximum effect and the last scene really works as both a revelation and a cliffhanger.

As usual, the Nova Scotia locations manage to be beautifully quaint and just a bit creepy – adding extra depth to the atmosphere of the series.

With last season’s finale, Spiral, and A Tale of Two Audreys, Haven has begun to fulfill some of its vast potential. The real ride is underway.