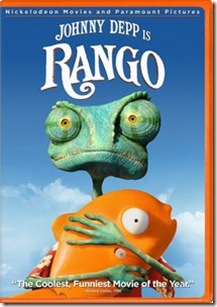 The story of the lonesome stranger who comes into town and becomes its savior is one that is as old as the act of storytelling. Gore Verbinski takes a script by John Logan and infuses it with color, energy, intelligence and wit and then animates it with an all-star cast and all the skill and resources available at Industrial Light & Magic [you might remember them from the Star Wars and Indiana Jones movies – for a start]. Making his characters animals doesn’t hurt, either.

Rango [voiced by Johnny Depp], a googly-eyed chameleon, is a solitary figure – and not by choice. An accident leaves him stranded in the desert where a quixotic [literally] armadillo [Alfred Molina] who is searching for The Spirit of the West fills him in on the idea of The Quest and sends him on his way – to a small, washed out town called Dirt. Commenting periodically is a mariachi band composed of four owls – a kind of feathery Greek chorus [further adding to the film’s layered mythos].

Dirt is a dwindling collection of lost souls whose need for water makes them vulnerable – to the water baron mayor [Ned Beatty], a tortoise, the hawk that regularly buzzes the town, and a nasty piece of work called Rattlesnake Jake [Bill Nighy]. Rango doesn’t belong there because, as young mouse Priscilla [Abigail Breslin] informs him, ‘You’re a stranger. Strangers don’t last long here.’

The female lead, a lizard named Beans [Isla Fisher], is possessed of a defense mechanism that is accurate [she freezes for intermittent periods of time] that underscores her vulnerability even as she shows intelligence and toughness that make her an intriguing character and more than a suitable foil for the clever but out of his depth Rango.

While the hawk, a family of hillbilly bank robbers and Rattlesnake Jake are the film’s most obvious bad guys, it’s the wheelchair-bound mayor – with Ned Beatty riffing on Chinatown’s John Huston – who is the real villain of the piece. It is he who controls the water, and he who has ambitions to building ‘The Future.’ Beatty nails the avaricious character with an understatement that beautifully communicates the character’s confidence – and malevolence.

Before Rango is even ten minutes in, there are echoes of Hunter S. Thompson, Salvador Dali, Miguel Cervantes, Sam Peckinpah and Sergio Leone. The film references so many films [Apocalypse Now, Shane, Chinatown and The Man With No Name movies among them] that it can tickle the discerning filmgoer in unexpected ways, but what is truly amazing is the way the story unfolds.

Considering all the references and influences Rango wears on its sleeve [the Nickelodeon goldfish even has a small role], the actual story and characters are smartly developed and beautifully paced. In the inevitable sequence where a disgraced Rango stumbles upon The Spirit of the West, the revelation of that character takes the film into the realm of the mythic. When Rango asks the armadillo if he saw it, the armadillo replies, ‘You see what you need to see.’

The animation is beautiful – possibly even better than Pixar’s. The colors are rich and the characters suitably weathered [or not] and textures abound, making the nearly dead town of Dirt as real as any incipient ghost town. The characters are detailed to such a degree that you can see Rattlesnake Jake’s individual scales – and the fire that burns in his eyes looks real.

Verbinski brought in Roger Deakins [True Grit] as a cinematography consultant, so Rango definitely looks like it was shot – as opposed to merely animated. There are some stunning vistas and camera angles that you don’t see in animation very often. The result is a film that is almost bewilderingly gorgeous.

Kids will probably enjoy Rango, but it is adults who will get the most out of it.