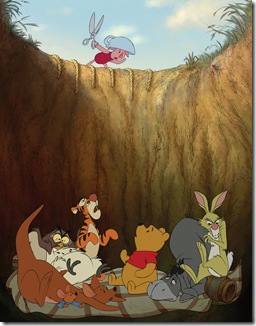 Following a live action introduction – the camera enters Christopher Robin’s bedroom and moves around the room, slowing for a good look at each of several plush animals before reaching, and settling on Winnie the Pooh. Then it dissolves into the animation bear and we begin.

The three parts of Winnie the Pooh find a hungry Pooh [voiced by Jim Cummings] looking for some hunny [his tummy is rumbling]; Pooh and his friends try to find Eeyore’s [Bud Luckey] tail, and Owl [Craig Ferguson] misreads a note from Christopher Robin [Jack Boulter] – leading the friends to believe he’s been kidnapped by a fearsome monster.

In other hands, one of Winnie the Pooh’s devices – Pooh occasionally stumbling into the paragraphs in the A.A. Milne book, with whimsical results – could have been precious, but here it feels as natural as the act of storytelling.

The animation is old school 2D hand drawn animation, done with genuine love – beautiful in its general simplicity, yet capable of unexpected detail [as when the animals are in the Hundred Acre Wood]. The voice cast – Cummings, Lucky, Boulter, John Cleese [The Narrator], Travis Oates [Piglet], Kristen Anderson-Lopez [Kanga], Wyatt Dean Hall [Roo], Tom Kenny [Rabbit] and Huell Howser [spoilers!] – are all just right, which is to say, excellent.

Directors Stephen J. Anderson and Don Hall have made a delightful film that moves a bit faster than Eeyore and bit slower than Rabbit. There are moments that hold for a beat longer to allow for laughter that arises naturally from a combination of character and situation, and moments when there is a bit more activity [Winnie the Pooh never stoops to acceleration for the sake of acceleration].

In short, Winnie the Pooh is Disney at its G-rated best. It is fine entertainment for kids of all ages – and that’s no small thing.