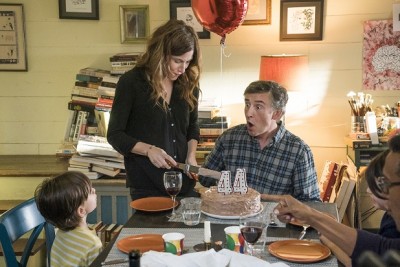 It’s impossible to review Happyish without noting that the series was created as a showcase for the late Philip Seymour Hoffman – and that he helped develop it with creator Shalom Auslander. It almost didn’t happen after Hoffman died, but when Steve Coogan agreed to sign on, it was tweaked for him.

Sadly, it might have been better for all concerned if it had been laid to rest.

Thom Payne (Coogan) is a creative executive at MGT, a high-powered advertising company. His best friend, Jonathan Cooke (Bradley Whitford) is an executive on the corporate side of things. His wife, Lee (Kathryn Hahn), works from home (apparently illustrating children’s books, or something) and they have a grade school-age son.

MGT has just brought on ‘The Swedes’ – Gottfrid (Nils Lawton) and Gustaf (Tobias Segal) – to reinvigorate the creative department. The two are in their mid-twenties and have ideas like making replacing the animated Keebler elves with little people and giving them real world problems, or getting New York Life to go for comedy in their advertising. Thom does not get them and, more importantly, they don’t get him.

Thom worries about anything and everything – which leads to rants about everything from Thomas Jefferson to God, and especially to social media. When he asks why anyone would ever want to follow Pepto-Bismol on Twitter, we can’t help but agree – but can he shut up after he’s made his point? No. No, he can’t.

Lee is Jewish and her mother never really loved her – so, in the second episode, a rant about that (to a huge Amazon parcel that’s a present for son Julius from her mother) turns into an argument in absentia that, again, goes on way too long.

With the new high-powered creative directors on board and accounts worrying about changes – to the company as well as to their campaigns – there’s also cost-cutting going on at MGT. One of their best media people, Debby (Carrie Preston), might be on the block.

At home, Julius learns Spanish from Dora the Explorer (Thom wonders why we only ever see her grandmother…), catches a bug (a temperature of 103.5 at one point) and is generally a typical little kid – whom Thom worries is going to die.

These events, over the first three episodes made available to critics, look good on paper, but mostly fall flat onscreen. Abusing commercial icons like the Keebler elves of the Geico Gecko must have sounded like genius before they were actually shot, but none of the gags lands.

Fortunately, Happyish isn’t a comedy – it’s a dramedy. Still, it took until twenty-one-and-a-half minutes into the second episode before I actually laughed out loud – it concerned that present from Julius’ grandmother. Actually, two gags about that actually got me to laugh out loud. (I also laughed once in the third episode – but not because of the gecko).

The problem with Happyish is that the writing is so intent on giving Thomas Jefferson, Mad Men, grandma and the gecko (among others) the finger that the stuff that actually works gets lost in the mix.

What works? Coogan, who makes much more of the material than should be humanly possible; the love in Thom’s family – the second episode, for example, only works when it’s dealing with Julius’ bug (directly or indirectly). There’s a sequence where Thom and Lee and a couple of friends are outside sneaking a smoke/toke away from their kids that is delightful – though even here, it goes on a couple beats too long.

In the second and third eps, Royal Pains’ Reshma Shetty gives a couple of presentations at MGT that have some life. Her character, Maya, is almost the only good thing about the MGT side of the series – besides Thom (when he’s mostly under control).

Then there’s the proliferation of f-bombs. Just because you can drop and f-bomb, that doesn’t mean you need to drop thirty or forty of them. As David Milch’s Deadwood showed, cussing only works if there’s some purpose and some rhythm to it. Here, it’s just a part of the environment – and that cheapens it and renders it ineffective.

Showtime has delivered some great programming over the last decade, so it hurts a bit to say this, but sadly, Happyish is just badish.

Photo by Mark Schafer/courtesy of Showtime