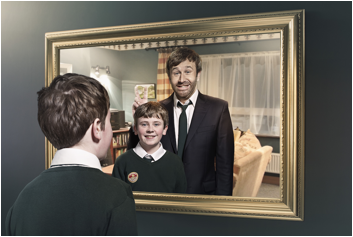 With the addition of Dessie and baby Rose to the already chaotic family, now more than ever, Martin feels disinclined to grow up and just wants to spend more time with his imaginary friend, Sean.

Starring David Rawle as Martin and series co-creator/co-writer Chris Dowd as Sean, Irish comedy Moone Boy returns to Hulu for its third and final season on May 13th.

Wrapping up the late ’80s in season one and season two, the Moone household comes crashing into the ’90s following the addition of Dessie and baby Rose to the chaotic brood. In no hurry to grow up, Martin and his imaginary pal Sean, plus best mate Padraic, enjoy a fresh batch of escapades, from becoming door-to-door salesman and hunting for UFOs, to wrangling pet donkey Donkey Kong.

“We’re so happy to see these lovable characters return for another season of Moone Boy,” said Lisa Holme, Vice President, Content Acquisition, Hulu. “We can’t wait to see what sort of shenanigans Martin and Sean get into…and out of this time around.”

“Chris O’Dowd is a tremendous comedic talent who has provided audiences with an insightful and unique point of view on his childhood,” said Matt Forde, Executive Vice President Sales & Co-Productions for BBC Worldwide North America. “The first two seasons of Moone Boy have been phenomenal successes on Hulu, the perfect home for the series.”

Moone Boy season three recently aired in the UK and premiered with rave reviews from the British press including the Radio Times who called the series “the Irish export that everyone should be watching,” and The Guardian, who called the show “adorable,” adding “charm seeps from every pore.”