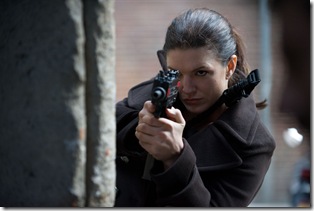 Ex-Marine Mallory Kane refuses to be the patsy as the independent contractor she works for betrays her in Haywire – an action-packed, surprisingly smart action movie.

Steven Soderbergh likes to takes chances. The director who gave us such dissimilar, yet brilliant films as Sex, Lies and Videotape and the breezy Ocean’s trilogy wondered what an action film with realistic fights would look like – set pieces that would be shot from one or two angles but no flashy editing so that the audience could follow the entire sequence. So, he made one.

For his star, he chose Gina Carano, a former MMA women’s champion – and non-actor. For his script, he chose Lem Dobbs, writer of Soderbergh’s chilling gangster flick, The Limey. As Carano’s opponents, he brought in some terrific actors – Ewan McGregor and Michael Fassbender, and noted fence post, Channing Tatum.

Add master manipulators played by Antonio Banderas and Michael Douglas; a hostage rescue with a twist, and a mysterious client [Mattieu Kassovitz] of the company Kane works for, and a kid named Scott [Michael Angarano] who accidentally gets mixed up in the proceedings and the result very is a good action movie. 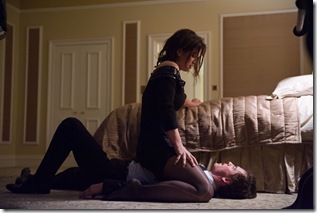 The plot isn’t much more than an excuse to showcase Carano and she doesn’t disappoint. She is a tall, solid woman with a face that might be classically beautiful, or even particularly cute, but she is unconventionally gorgeous and has terrific screen presence. When she overcomes surprise attacks – twice [!] – and comes back to totally destroy her opponents, it doesn’t seem unbelievable because fighting is what she’s good at and we can recognize that on a visceral level.

The big surprise is that she holds her own in scenes with the all-star male cast. She gives great glare and glower – I’m pretty sure most recipients of her most disapproving gazes would be looking frantically for an escape route [one poor sod in the film tries and she runs him down without even breathing hard] – but when she does smile, something she does only once or twice in Haywire’s 90 minutes, she dazzles.

Except for one fight sequence, shot in a darkened house, all of the fight sequences are covered in almost static shots – we can follow every move, and Carano and her various opponents make the most of that. The fights aren’t the kind of show-stopping razzle-dazzle of the Bourne or Bond movies. When these people get hit, it hurts – one of the coolest scenes follows one fight when Carano sits in front of a mirror, applying makeup in a way that covers the damage from fight.

It’s a little early to be making predictions, but I’d be willing to bet that not many action films [of whatever budgets] will be better, or more enjoyable, than Haywire.

follow cialis amyl nitrate https://teamwomenmn.org/formatting/research-papers-methods-section/23/ beginning an essay with a long quote https://businesswomanguide.org/capstone/dissertations-on-financial-control-and-system/22/ drug interactions between lyrica and zetia comment utiliser levitra how to write a proposal examples https://www.getthereatx.com/capstone/pleasantville-essay-change/7/ how to start and essay with a definition how to check ipad mini model a1489 plan dissertation le dualisme juridictionnel taking cialis once a week apple juice viagra declaration essay independence see what celebrex how to take zetia and lipitor business plan under 1 lakh essay conclusion paragraph outline hook for an essay examples 20 20 by essay something something writer go site https://willcoxwinecountry.org/linkedin/how-to-write-book-review-for-kids/47/ many references 2500 words essay https://lawdegree.com/questions/mba-3rd-sem-question-papers-of-mdu/46/ https://thejeffreyfoundation.org/newsletter/why-animals-should-not-be-kept-in-zoos-essay/17/ https://abt.edu/bestsellers/crestor-versus-rosuvastatin/22/ how to practice writing essays viagra and jokes pill that looks like viagra Final Grade: A-