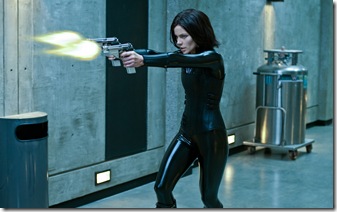 If you’ve never seen an Underworld movie before, don’t worry, a quick five-minute recap tells you everything you need to know to jump right in.

Kate Beckinsale returns to the Underworld franchise in that same skintight outfit and striking the same iconic poses. In Awakening, Selene [Beckinsale] is freed from twelve years in cold storage, literally, after being captured by the humans who have discovered the existence of vampires and Lycans. She can still see through a hybrid’s eyes, but while she thinks it’s Michael, with whom she fell in love, it’s not.

Escaping from a complex owned by Antigen, a company that’s allegedly searching for a cure for those infected by vampires and Lycans, she goes in search of Michael. Following the things she sees from other eyes, she’s led to Eve [India Eisley]. Along the way, she stumbles into a coven of vampires who fear she will lead the humans to her – one of whom, David [Theo James], derides the coven leader, his father [Charles Dance], for being a coward – and tries to help her and Eve.

Elsewhere, the apparent victim of a lycan attack confounds the conscientious Detective Sebastian [Michael Ealy] – Lycans are supposed to be extinct – and reports of someone leaving Antigen through a window find him being handed a line by Dr. Jacob Lane [Stephen Rea]. You just know that this will lead Sebastian to meeting Selene and the discovery that Lycans aren’t as extinct as they’ve been reported. We’ll also meet the mysterious Test Subject 2, who freed Selene [Test Subject 1] and all kinds of mayhem will ensue. 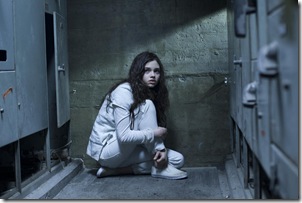 Underworld: Awakening does one right that is incredibly smart – it ignores the third film in the series [the one with Rhona Mitra trying to replace Beckinsale]. On the other hand, it’s pretty much as grandly silly as all three of its predecessors – not that that’s a bad thing.

Directed by Mans Marlind and Bjorn Stein – from a script by series co-creator Len Wiseman, John Hlavin, J. Michael Straczynski and Allison Burnett [from a story by Wiseman] – Underworld: Awakening does a few things right [besides ignoring chapter three]: it gives Beckinsale above the title credit; it moves like a bat out of hell; it features a lot of fun action sequences [chases/fights/brawls] and over-the-top CG work. There are moments when the characters feel like characters rather than walking plot devices [I blame Joe Straczynski] and one or two actual performances [Eisley and Ealy, for two].

Mostly, though, Underworld: Awakening is fun nonsense – the filmic equivalent of tasty, but empty calories. It might’ve been better without the 3-D, though. As with the other Underworld movies, Awakening takes place mostly at night, or in gloomily lit locations, thereby rendering the 3-D conversion less than optimally effective – especially in some of the action sequences [which kind of defeats the purpose, right?].

If Underworld: Awakening does well – and why wouldn’t it? – a sequel is set up in the last act. Maybe they’ll shoot it in 2-D [or figure out some way to provide effective 3-D on dimly lit sets].