Now the bloom is off the metaphorical rose, the big question for lovers of R-rated superhero movies is this: Is Deadpool bigger and better than Deadpool 1?

The answer is a definite yes to bigger – and a definite maybe to better.

Deadpool took on the comics tropes of the standard superhero origin story and superhero soap opera romance – and convincingly kicked the crap out of them while remaining absolutely faithful to them. It was a perfect example of how a piece of satire/spoofery has to be a good example of the genre it’s satirizing/spoofing.

Deadpool 2 takes that approach to time travel, family (as Mr. Pool says, ‘This is a family movie’) and forming a superhero group. It also takes digs at everything from silly code names to the right’s fuss over LGBTQ, the DC universe (could be the comics; could be the movies – probably both) and so much more. 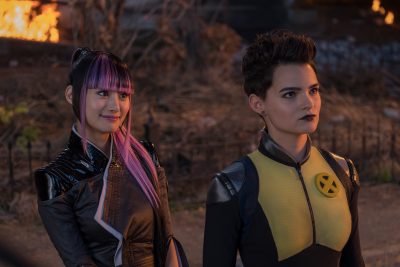 Not many superhero movies would open with the title character trying to commit suicide but, then, Deadpool (Ryan Reynolds) is not your grandpa’s superhero, is he?

There’s a reason behind this desperate action and DP2 rewinds six days so that we can get the full story. It isn’t pretty – though it starts of far too hopefully for the Merc with a Mouth.

This leads to Colossus (again voiced by Stefan Kapicic) taking him home to Professor Xavier’s School for Gifted Students (and a very clever gag about the seemingly empty school that brought the house down at the screening I attended) to recuperate.

Cue X-Men trainee Deadpool – getting it all wrong at a home for ‘mutant rehabilitation’ run by a weaselly headmaster (Eddie Marsan) – as we meet the reason for Cable’s (Josh Brolin) impending arrival: a 14-year old mutant named Russell (The Hunt for the Wilderpeople’s Julian Dennison) – whose idea of a code name is Firefist. 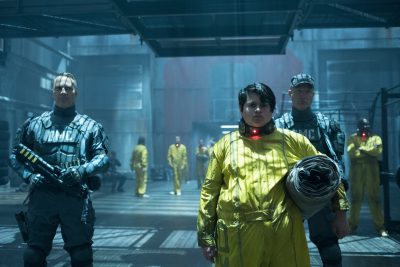 Cable’s arrival is suitably Terminator-like – the two rednecks (two of the film’s best cameos) who happen to be where he arrives have a half-ton, which he appropriates.

Meanwhile, Red and Russell find themselves in the Icebox (a kind of Arkham/Bellreve for Marvel’s nastiest villains) when Cable shows up. The result shows DP that he might need help (while Russell finds some from an unexpected source).

Thus, the formation of X-Force – a truly inspiring sequence featuring the power of social media. And a gentle reminder that no battle plan survives contact with the enemy.

Working from a script by Rhett Reese, Paul Wernick and Ryan Reynolds, director David Leitch (John Wick, Atomic Blonde) produces a film that is even more kinetic than DP1 and filled with at least as much heart (and a couple/three moments of oddly exhilarating spirituality!).

While Vanessa (Morena Baccarin) and Weasel (T.J. Miller) have a lot less screen time (for very different reasons), each does make a contribution to the story (well, more Vanessa than Weasel – but that’s nothing new).

Negasonic Teenage Warhead (Brianna Hildebrand) returns for a couple of explosive sequences and a couple less violent ones (we meet her new girlfriend, Yukio – played by Shioli Kutsuna – a cheery young woman who takes an instant liking to Deadpool).

Deadpool aside, DP2 is almost highjacked by Zazie Beetz. Her character, Domino, has the superpower of luck – which Deadpool argues isn’t a power even as we see a sequence that clearly says otherwise. And Beetz squeezes every last ounce of fun out of the role.

Eventually, we learn why Cable wants to kill Russell – and we can sympathize with him while not approving of his actions.

The nature of the Deadpool comics and films is that they can be almost unspeakably raunchy one second and genuinely affecting the next. There are times in DP2 when the film is both at once.
At a hair under two hours, Deadpool 2 is a zippy, energizing film that doesn’t feel bloated (even as it’s stuffed to the gills with all kinds of zingers, cameos, Easter eggs and weirdness). The post-credits scenes come immediately following the main credits and are well worth waiting for.

After careful consideration, I’m not entirely sure that Deadpool 2 is better than the original, but it’s at least as much fun – and given the events of the film, it’s entirely possible we could see another sequel, an X-Force film, or both.

I’d buy that for a dollar.