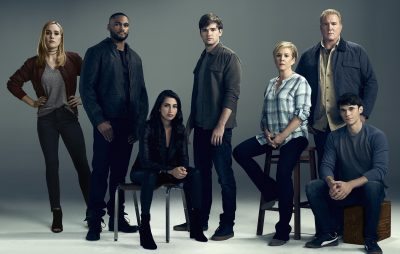 Season one of Beyond (Freeform, Thursdays 8/7C),  ended with Holden and Willa returning from The Realm thinking they’d saved the world – and proved that contact with the dead was not possible after all.

They were only part right.

The two-hour season two premiere of Beyond – Two Zero One/Cheers, Bitch! – opens with the introduction of another ‘special’ character, Edgar Abbott, as a child whose father tries to protect him from a hurricane. When he crawls out from under some debris, weird things happen. 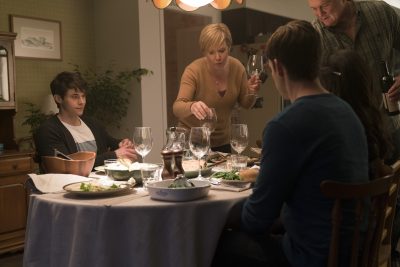 Holden (Burkely Duffield) is shopping for a new bed with his parents. Pretty mundane, right?

Well, after a few charming family moments (we learn that he’s working for his dad’s company, for instance), we follow Holden through a lucid dream in which horrible things happen.
When he mentions his dreams to Willa (Dilan Gwyn), she says they’re just dreams.

There are a couple of brief scenes with Edgar (Jay Paulson) that suggest that might not be the case. Also scenes with Charlie (Eden Brolin) getting to know an expectant mother named Robin (Aliyah O’Brien) for the show’s Yellow Jacket Man (Peter Kelamis) and even a bar fight sequence that, all together, serve to broaden the physical scope of the series on Earth while building an undercurrent that adds to danger suggested by Holden’s dreams. 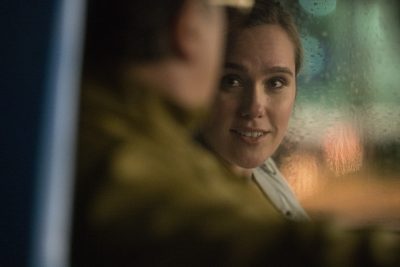 Written by series creator Adam Nussdorf and directed by Steven A. Adelson, the two-hour season two premiere gives us a look at Holden at work; Jeff McCardy’s (Jeff Pierre) involvement with raising his deceased brother’s baby – and an unexpected link to Hollow Sky/Helping Hands, the cult we saw in season one.

Arthur (Alex Diakun) has an even darker arc, this season, too. He is desperately trying to rebuild his machine, so he can see his daughter again – though Willa tells him what really happened in The Realm, last time.

Beyond continues to be a series about a young man with strange powers – and the dangers he must face – but it’s also about family, the deferred trials of adolescence and obsession.
The second season premiere sets up a new, potentially global danger and creates smaller, more personal trials for its regular and important recurring characters.

Two Zero One/Cheers, Bitch! Make for a solid, occasionally inventive two hours’ worth of entertainment by mixing the macro and the micro – the fantastic with the mundane.