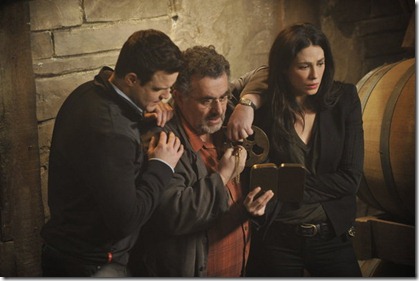 Season Three of Warehouse 13 (Syfy, Mondays, 9/8C) ended with Walter Sykes destroying the warehouse. Season Four opens with the realization that one of the artifacts destroyed was Pandora’s Box – and with it, hope.

A New Hope isn’t just the title of the original Star Wars movie – it’s what the Warehouse agents hope to provide, but only if they can find a way to undo the effects of Walter Sykes’ (Anthony Michael Hall) bomb. Otherwise, the warehouse remains destroyed and the world falls into an abyss of hopelessness.

Artie (Saul Rubinek) has one remaining card to play – Barbossa’s Watch. Barbossa was the captain of Magellan’s ship and it has both a clue to finding an artifact that can help them reset everything for the last twenty-four hours, and a supernatural stopwatch that counts down to the point when said artifact will no longer be of use.

Artie, Agents Pete Lattimer (Eddie McClintock), Myka Bering (Joanne Kelly) and Claudia Donovan (Allison Scagliotti) must find an unknown artifact and figure out how to use it – all the while dealing with a number of challenges that could prevent them from reaching their goal – and save the warehouse (and therefore the world) in twenty-four hours. No problem…

Almost like it was predestined, our plucky band of agents travels to France to find the artifact – to then discover that they must then solve a puzzle that will take them to the Vatican. In their way stands the Brotherhood of the Knights of the Black Diamond, a group of Templars who guard the artifact in question. And that’s just the beginning. 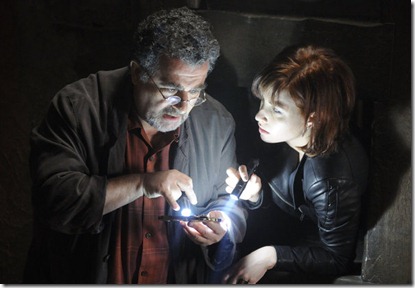 A New Hope shows each of our core cast at their best and worst as they face each challenge. Plus, there’s a warning given to Artie that foreshadows a potential Big Bad for the rest of the season. As the agents are tested, we get a look at the unbearable heavy burden that Artie must carry as the head agent of the warehouse. Frankly, the responsibility might break even the most heroic of characters – let alone (as Claudia refers to him at one point) Pooh Bear.

Written by showrunner Jack Kenny and directed by Chris Fisher, A New Hope is filled with important character beats. As the ep progresses, we get to see each of the agents – and Leena (Genelle Williams) – working one important parts of the puzzle. Unusually, the ep marks the first time that they’ve been seeking an artifact to actually use it themselves – and that leads to some dark moments for all, but especially Claudia, who really wants to find a way to bring Jinks back.

The ep moves maybe just a bit too quickly and solves problems a bit too neatly – though the consequences of the team’s progress are definitely huge, and will shake the show’s fans. One thing is certain, though, the warning Artie is given – while seemingly redundant – is given some gravity by the priest who delivers it. He is played by Brent Spiner – who will appear again before the season is over.

As a fan of the series, I was disturbed by the ep as much as I was entertained. There is a more than usual amount of real darkness here that suggests the new season will be the most intense one yet. It’s just a shame that the season premiere had to do so much. It might have been a good idea to go with a two-parter to get things rolling. That would have allowed for the possibility of doing more character work – as well as making the solutions to various parts of the overall puzzle a bit more difficult. That would have better earned some of the consequences that the agents suffer, and perhaps given Kenny the opportunity to explore more of the darker humor that suffuses the premiere.

One thought on “Warehouse 13: A World Without Hope!”