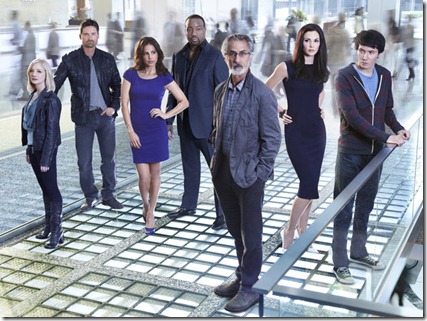 Wake Up Call is the second season premiere of Alphas (Syfy, Mondays, 10/9C). It’s been eight months since Dr. Lee Rosen went public about the alphas and he has spent the intervening time in a mental health facility while the government has attempted to build a case for his having a history of mental health issues. But he is patient…

Since Dr. Rosen’s incarceration, the Alphas team has been split up – Bill Harken (Malik Yoba) and Cameron Hicks (Warren Christie) are working with the NSA, trying to take down alphas who have chosen to ignore the law; Gary Bell (Ryan Cartwright) has been shuffled off to a cubicle at the DEA; Nina Theroux (Laura Mennell) has gone back to her old ways – pushing people into giving her stuff, providing a place to live and generally living high on the hog, and Rachel Pirzad (Azita Ghanizada) has retreated to her parents’ home, where she hides in her bedroom, trying to shut out the noise of the world.

Things are not going well for any of them.

Of the original team, Rosen alone seems serene, explaining that one day soon there will be an Event that the government cannot cover up or control – and then they will call on him. Only his daughter, Dani (Kathleen Munroe) visits him in the hospital – using her ability to remove the drug-induced haze from the meds he is forced to take – but even then, we see that his serenity is more a controlled, focused anger. 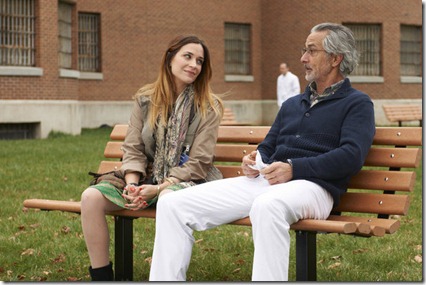 We also see Bill and Hicks try to foil a supermarket robbery by a trio of alphas – a situation that has unexpected consequences. Indeed, they lead to the event Rosen has been expecting – though that event – and Rosen’s subsequent freeing take on a totally different to the audience than they do for the participants.

Since Rosen’s big move – exposing the truth about alphas – we are soon to learn that Stanton Parrish (John Pyper-Ferguson) is just as capable of doing the unexpected. And he is playing this particular chess game on a life-sized board.

Outside of the exponential raising of stakes, the second season of Alphas begins with an episode that maintains a few traits from the first season: when there is action, it’s very intense; almost everything that happens in the series has the potential to go in unexpected directions; characterization is always at the forefront – every action works to develop character as much as the more conversational scenes, and the humor is always well place and follows naturally form the characters and their interaction.

Wake Up Call could have been the title of the show’s first season finale – with Rosen’s big reveal to the world – but seems more appropriate here for less obvious reasons. Rosen serves notice that he will not be pushed around by pencil pushers who have no clue; Parrish serves notice that he is thinking big, and certain relationships may jolt the audience.

Alphas’ second season premiere sets the stage for Rosen and Parrish to wage their war of philosophies on a grander scale, while remaining a surprisingly intimate character driven drama – and it’s still a lot of fun to watch.