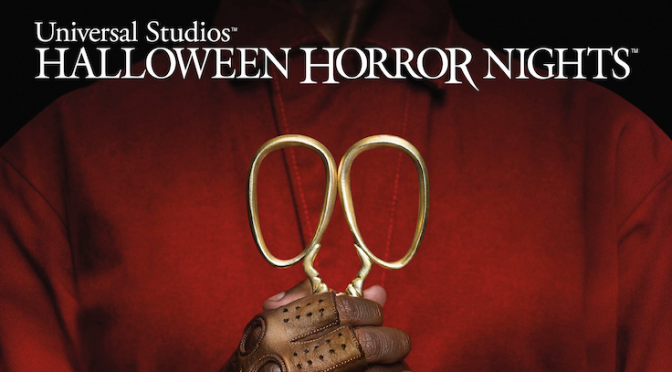 See what I did with that headline? I’m a genius.  It’s August so that means we’re due a bunch of announcements regarding Universal Studio’s annual Halloween Horror Nights festivities and houses. It’s one of the park’s biggest events of the year and they usually go all out. Their first announcement, at least that I’ve seen, is US is getting it’s own House. I lie, I believe I saw an announcement a few months back that Stranger Things and Ghostbusters is also getting houses this year. I’m not a huge fan of haunted houses because I’m a little scardy cat, but Universal Studios pulls out all the stops for this annual October event. Official press release is below.

Featuring the unnerving labyrinth of underground tunnels that stretch from coast to coast below America, to the disorienting and the ominous uprising of “The Tethered”— doppelgängers of every living man, woman and child in the country—the “Us” maze will place guests at the heart of this living nightmare where they quickly realize they are their own worst enemy.

The journey begins circa 1986 as guests follow in the footsteps of the young girl they first meet as Adelaide Wilson as she innocently ventures through a mirror funhouse at the Santa Cruz boardwalk and has a fateful and traumatic encounter with her tethered doppelgänger, an event that will forever alter both of their lives.  The harrowing experience will then transition to present day, thrusting guests into the chaos of “The Tethered” uprising as they emerge from their tunnels to murder their privileged doubles in a nationwide coordinated act of rebellion.

“It’s very exciting to know that fans of Us will get to experience firsthand the terror of being stalked and tormented by ‘The Tethered.’ It’s been a lifelong ambition of mine to create a monster that would scare people on Halloween, so having ‘The Tethered’ join such esteemed company is a dream come true,” said Jordan Peele.

“Jordan Peele has put his indelible stamp on a new genre of psychological horror films with the Academy Award®-winning movie, Get Out and the critically-acclaimed film, Us,” said John Murdy, Executive Producer, “Halloween Horror Nights,” Universal Studios Hollywood.  “And, it’s an honor to have the opportunity to work with him and his talented team to bring his unique vision for Us to life as a ‘living horror movie’ as part of ‘Halloween Horror Nights.’”

“The idea that ‘we are our own worst enemy’ and the visuals around that notion are what made the story of Us so compelling, personal and exciting for our design team to translate,” said Michael Aiello, Sr. Director of Entertainment Creative for Universal Orlando Resort. “Surrounding our guests in that horrific world of duality Jordan Peele created is a perfect fit for Universal’s ‘Halloween Horror Nights.’”

Universal Studios’ “Halloween Horror Nights” is the ultimate Halloween event. For more than 25 years, guests from around the world have visited “Halloween Horror Nights” to become victims within their own horror film.  Multiple movie-quality mazes based on iconic horror television shows, films and original stories come to life season after season. And, the streets of each park’s event are transformed into highly-themed scare zones where menacing scare-actors lunge from every darkened corner.