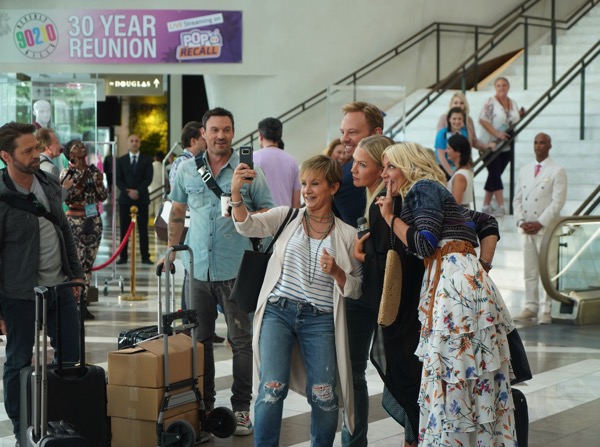 As an old school BH90210 fangirl, I’ve been looking forward to seeing this all year. Unlike the CW reboot from a few years ago, which I liked a lot, this reboot was going to bring back everyone from the original cast. Brenda, Donna, David, Steve, Kelly, Brandon and even Andrea (who disappeared after season 5 during its original run). I was looking forward to seeing where these old friends are as adults. We got a brief glimpse during the previously mentioned CW reboot as it did feature Shannon Doherty’s Brenda Walsh. But this, this was a full-on continuation of the series I loved.

Imagine my surprise, shock and outrage when these were the actual actors. So, if this review wasn’t a confused mess by now, it’s going to get messier. You see the conceit of this show is that all of the actors are playing exaggerated, real life versions of themselves. So this is where it’s kind of a reality show about the cast getting back together to attend a Beverly Hills 90210 reunion at some convention.

Each cast member is well past their glory days and when we meet them they are barely functioning adults. Jason Priestly is a TV Director who needs to rehabilitate his image after getting into a fight with his lead actor. Ian Ziering attends the convention to promote his brand. Brian Austin Green spent his post 90210 years playing Mr. Mom to his while his far more successful wife is one of the biggest Pop stars in the world. Gabrielle Carteris is the head of the Screen Actor’s Guild (SAG). Shannon Doherty is some weird eco-savior. Jennie Garth is going through her 4th divorce and attends the convention to support her bestie the always broke Tori Spelling.

It’s just such a wacky way to do a reboot, I actually found myself actually googling everyone to see how much of the show was real verses fake and I’m still not quite sure. I mean we all know BAG is married to Megan Fox in real life and Gabrielle Carteris actually IS the President of SAG. After their wild weekend in Vegas, they go back to their real lives, but going back to the real world has a lot of consequences. Including cheating spouses, surprise pregnancies, one of the characters questioning their sexuality and more.

Meanwhile Tori, desperate for money hits upon the idea that now is a perfect time to do a reboot. Network executives are gung ho for the idea, but she has to convince the rest of the cast to get onboard.  I loved the idea that Shannon was secretly Brian’s best friend.

I’m not sure how they turn this concept into a limited run series, much less a multi-year thing. But even after the first two episodes you can see them setting up all the tv drama clichés and old Beverly Hills 90210 tropes, only they are going to try to do it as an “art imitates life” kind of thing. We see BAG and Tori’s sexual attraction, Tori and Jason have a fling in the first episode, despite his being married. Ian’s marriage is on the rocks which plays into the Steve Sanders screw up. Jennie has a daughter who wants to get into acting but after she was completely against it, she gives in. The question is will we see Jennie’s daughter attend school to bring in the high school element as well?  After two episodes, I still don’t know how Shannon fits into it.

To address the elephant in the room, beyond raising a toast to Luke Perry, they don’t mention him at all in the first two episodes. Which is probably a good thing. You don’t want it to see like they are capitalizing on his death and you don’t want the show to be depressing either. I guess this was the best way to handle it. Acknowledge it briefly and then move on.

Nostalgia is a dangerous drug, I don’t know if I loved the first two episodes because they were good and weirdly subversive or if I just like seeing this group of people back together again. I’m down to see where this goes.