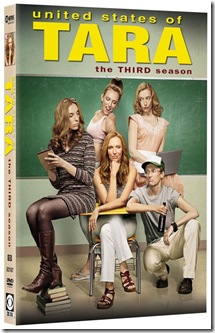 Season Three finds Tara Gregson [Toni Collette] returning to college, where she encounters Dr. Hattaras [Eddie Izzard], who teaches her Abnormal Psychology class. Things do not go swimmingly, as her Shoshanna alters and begins teaching the class before Hattaras enters. Since he doesn’t believe that Dissociative Identity Disorder exists, he is not impressed – but as someone who can be completely objective because of his stance on DID, he offers to work with Tara. If he can help her, or if she can convince him of DID’s reality, then they both win – especially since he can write a paper based on their work together in either case.

Meanwhile, Tara’s husband, Max [John Corbett] is finding things tough going with his business and faces having to sell it to a competitor – putting his best friend, Neil [Patton Oswalt] out of work just as he and his girlfriend [and Tara’s sister], Charmaine [Rosemarie Dewitt] are having a baby.

Kate [Brie Larson] is facing challenges, too. Her efforts to strike out on her own but her online business is hampering her. It comes to a choice between teaching English in Japan, or becoming a flight attendant. Her brother, Marshall [Keir Gilchrist], is suffering the throes of first love – with the impudent but Lionel – and trying to make a short film with Lionel [Michael Willett] and their friend Noah [Aaron Christian Howles], for class [their teacher has high expectations for them since they are the only gay students in the class].

When Neil has to go out of town to train for a job, Charmaine is left to her own devices – essentially being a single mom while he’s away. At the same time, Tara develops a new alter – one that seems intent on killing the others off!

The third season of United States of Tara found Tara and her family breaking new ground: Tara’s situation with her alters took a huge swing in unexpected directions; Max had a major realization about his job; Kate had to figure out the first step in forging her own life; Marshall had love and life issues to deal with while trying to get a start in serious filmmaking; Charmaine had to put aside her issues with Tara to accept her help in dealing with her daughter, wheels [you’ll have to watch to understand – I’m not even going to try to explain], and even Dr. Hattaras had a life-altering experience [though not one he particularly wanted].

Season three nicely maintains the level of quality generated in the show’s first two seasons. The writing is always very good at worst – and brilliant at best – there are new developments for every regular [and major recurring] character; the most mundane events take on unexpected significance, while major events, no matter how seemingly over the top they might be, are so well grounded in the reality of the show’s premise that they feel completely natural. By introducing Dr. Hattaras, the series gives a different perspective room to play out – and Izzard makes this complex character as compelling as the show’s regular cast.

We also meet, for the first time, Max’s mother, Sandy [the always amazing Frances Conroy], a woman who knows from crazy – since she’s a little crazy and more attuned to it than most. In her episodes, Conroy steals every scene she’s in – even when the other character is Tara’s belligerent new alter.

Once again, though, we see why Untied States of Tara is built around Collette – she shifts between Tara and her alters seamlessly. She is utterly convincing in every personality. As her alter hunts down each of the others, she brings their pain, confusion and desperation to life.

The thing about United States of Tara is that it portrays a person with DID in a generous, unbiased way. We see the way having all these separate personalities affects Tara and everyone in her family. There is – what with the show being a dramedy – as much humor as drama in each episode, but neither Tara nor her alters are used for cheap laughs.

The cast and crew of United States of Tara have given us three seasons of amazing television, with each season being better than the last. It’s really a shame that there will be no more new episodes, but stuff happens – not all of it great.

It’s also a shame that the DVD set is so light on bonus features – the series deserved better.

Grade: United States of Tara: The Third Season – A+