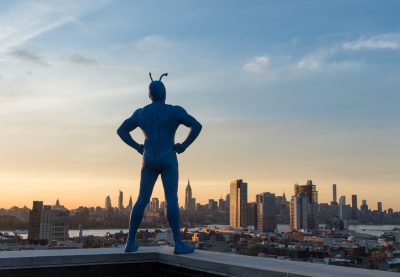 The Tick (Peter Serafinowic)z – Mighty Blue Justice on the lookout for evil – Photo courtesy of Amazon.

I did not see this coming – the announcement date for the premiere of Amazon’s The Tick is disturbingly… normal? (That was unexpected!)

**Today Amazon Prime Video announced Friday, August 25 will be the premiere date for the highly-anticipated superhero comedy series The Tick.

In a world where superheroes have been real for decades, an accountant with zero powers comes to realize his city is owned by a super villain. As he struggles to uncover this conspiracy, he falls in league with a strange blue superhero.

The Tick will premiere on Amazon Prime Video on Friday, August 25. The series is created by Ben Edlund, and the cast includes Peter Serafinowicz (“The Tick”), Griffin Newman, and Valorie Curry.