After the opening recap, we see Anna move into frame and face the camera. She is the first V to receive a diplomatic visa to the United States. Chad Decker’s voice proclaims “It’s a bright new day in America…” as we move outside the Peace Ambassadors Center, where Chad is broadcasting live – and protesters have gathered. We cut between various V’s, including Marcus, and the protesters. Chad’s assistant, Haley, tells him he helped make history. He doesn’t look particularly pleased. He sees Anna get into a glass elevator and sees her staring down at him. 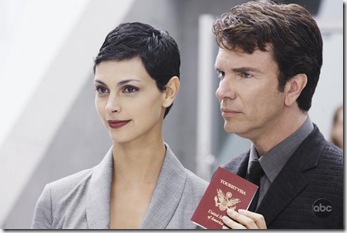 Father Jack is hearing confessions. Some have reason to be grateful to the V’s; others feel lost, have doubts about God. Jack gets more distraught as they speak. At Erica’s home, she’s sorting files from the list she “procured” last week. We see two stacks: Crazies, and Deceased. As she listens to a newscast, she checks names against the FBI database. She complains to Tyler that there’s been no time to do a proper threat assessment – “it’s like 9/11 never happened.” She doesn’t want Tyler going into the city. He says he’s just giving Brandon a lift. As he’s about to leave, there’s a knock on the door. It’s Father Jack. “We work together,” says Erica.

Jack is there because he wants to help. He also has questions like, “What don’t they just annihilate us and get it over with?” When Erica gets a call from Paul Kendrick, he stays and continues to weed through the files. The threat must be dealt with, as she says, “If a human kills a Visitor, that makes us the bad guys.” Erica has been selected to help secure the V’s – someone has made death threats. At the PAC, Erica is teamed with a V investigator.

Elsewhere, Ryan is walking Valerie to work – something he never does. With the Visitors and the protesters, it’s crazy, but whatever the reason, she thinks it’s nice. Once she gets to work, a car pills up beside Ryan and he gets in. It’s Georgie, who’s lying low since the meeting. He’s scared, and with good reason. Ryan tells him it’s only going to get worse and “we need to mount a resistance now!” To assuage Georgie, Ryan tells him that John May is real.

On the New York mothership, Marcus and Joshua discuss Dale, who has suffered amnesia from Erica’s beat down. Joshua tells him that Dale may never recover his memory. Marcus needs to know if he’s been compromised and, if so, by whom. Joshua returns to sickbay [which also, conveniently doubled as the torture chamber, last week], where he finds Dale awake. Whoever stabbed him was going for his heart – the joke’s on them. Dale asks Joshua’s help. He needs to know who did this to him.

Anna learns, by watching Chad’s newscast, that the leader of the protesters is Mary Faulkner, widow of a pilot who died because of the New York mothership’s arrival. She wants to know everything about the woman. Tyler lets Brandon off at the PAC. He leaves before Lisa can see him. 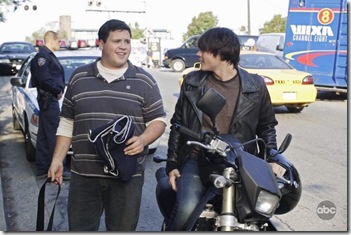 Erica arrives at the PAC and Kendrick gives her the profile on the guy behind the death threats. They will work with V security – one human teamed with one V. The first thing she tells her new partner, Stephen, is that she needs access to V surveillance. When they enter the room, she points out a flaw in the video. She also sees someone go into the room across the hall – and notices his alarm code.

Back at Erica’s house, Jack finds a file on Georgie, leaves her a message, and heads out to find him. Meanwhile, Ryan is talking to Georgie – telling him about Cyrus. He heads to a coffee shop that’s being renovated and finds Cyrus. On the NY mothership, Anna addresses the commanders of the twenty-nine ships, exhorting them to act to influence popular opinion as the V’s establish beachheads through diplomatic means.

Joshua tells Dale about being the only V survivor at the warehouse meeting. When they found him, his disguise was wide open. Marcus informs Anna the Faulkner dossier is ready and she explains why one person is so important. Father Jack arrives at a shabby house, where he meets a woman with whom he leaves his card, after she refers to the murders – and he remembers what Georgie said at the underground’s meeting.

At the restaurant, Ryan finds that Cyrus is not the man he used to be. He’s turning over Fifth Column members in hopes of being reconnected. He’s a junkie and Ryan knows they’re using him. When Cyrus pulls a gun on him, he takes it away from. At gunpoint, he tells Cyrus, “You’ve got to be alive to be reconnected.” At the PCA, Erica and Stephen climb to the building’s roof. She spots a place where a guard is missing. The unconscious guard is missing his jacket.

We see a young man fastening a V jacket. Erica spots him and follows him into the building. Just in time, she sees him and shouts a warning. As the crowd flees, she takes him down. She and Stephen take him to a holding room inside the PCA. Meanwhile at a nearby pizzeria, Tyler and Brandon enter as Chad reports the story. Lisa is sitting at a window table and shyly waves to him. Brandon, who set it up, diplomatically leaves them to talk. She tells him that she spoke to The Council and he’s back in the program. 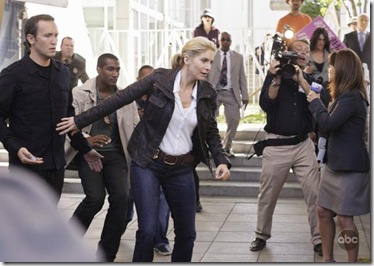 In the PCA, the would-be assassin is turned over to the V’s. “It’s complicated,” Kendrick tells Erica, “I’ll meet you in front of the building.” As she leaves, Erica sees an opportunity and lets herself into the locked room, where she finds hundreds of screens showing as many different locations. One of the screens shows her and when she looks for a camera, she realizes that a jacket hinging on the door behind her is providing the video. After she leaves the room, one screen shows Tyler and Lisa in the Evans home.

As a V shuttle touches down, we cut to Anna – who is rehearsing something. When Faulkner arrives to speak to the protesters, she is intercepted by Anna, who requests a brief conversation. “This was the only way we could meet without causing a scene.” Inside the PCA, Kendrick introduces Erica to Marcus who thanks for saving his life. Anything else I can do…” she says. “And vice-versa,” he replies.

In the sickbay, we see Dale’s body, but he’s seeing the FBI office where he worked. Joshua’s construct works and he remembers he wasn’t the only V in the Agency. It was a disgusting experience, waking up next to a human every morning. The he mixes up his wife and Erica, which leads to his remembering that it was her who cracked his skull – and disguise! “I’m going to kill her.”

In front of the votive candles in his church, Jack is ambushed by Georgie, who puts a gun to the back of his head. He explains why he and Erica were at the meeting and who led the ambush. Jack talks to Georgie about his family and how the arrival of the V’s has made him feel. “We need to stick together, George,” he says. “It’s Georgie.” Count one for the resistance. Meanwhile, on the NY mothership, Dale discovers, to his fatal surprise, that Joshua is a Fifth Columnist!

Back at the PCA, Mary Faulkner gives a speech, but it’s not the one everyone expected. Anna, it seems, has won her over. After her remarks, Anna joins her on the podium. She tells the crowd about the assassination attempt and says that the V’s will not respond in kind. At Cyrus’ restaurant, Marcus and a team of V’s arrive to find a bit ash is all that remains of the former Fifth Columnist. On the swinging door behind them is a slogan/warning, “JOHN MAY LIVES!” “There will be no peace,” says Marcus. 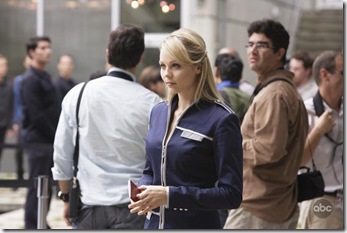 Tyler and Lisa enter his room. They kiss – but are interrupted by Erica calling him. He shucks the Peace Ambassadors jacket and steps into the hall. Erica hears a noise in his room – it’s a half-naked Lisa. Erica tells Ty to take her home. “We’ll talk later.” Elsewhere, Anna manages a tight smile as Chad reports on the blow to the protest movement. Between Faulkner’s change of heart and Anna’s clemency for the assassin, there’s been a huge growth in V support.

Anna turns from her screen and tells the “assassin” he’s done well. Chad gets an exclusive interview with Faulkner. Erica tells Jack about the jackets. The church door opens, Erica takes out her gun. It’s Georgie and he’s brought a friend – Ryan! Back on the NY mothership, Lisa reports to Anna, who commends her work, I’m proud of you.” “Thank you, mother.”

Not only are the V’s more technologically advance than us, they speak better English, too.

The jacketcam thing is pretty spiffy, since there’s no obvious pinhole for a camera. The fabric itself seems to be broadcasting the signal. It’s a good thing that the Hitler Youth didn’t have that technology!

Lisa is Anna’s daughter. No wonder The Council listened to her! It seems that family really is something the V’s have in common with humans. Also, nepotism!

One wonders if Lisa might actually fall in love with Tyler and spill the beans, then join the resistance… It’s not out of the question – Ryan really loves Valerie, even though she’s human [or maybe because of it… stay tuned]. There’s something about that last look Lisa gives her mother as she walks away… 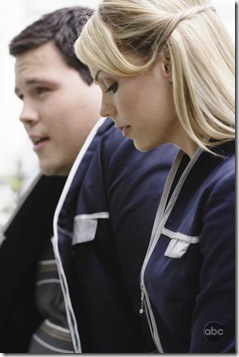 Brandon is smarter than he looks. That set-up was nicely done.

Tyler is glad his mom thinks he’s messing around – it’s better than keeping company with a V. The closing sequence with him and Lisa was the first that didn’t suck the life out of the ep. It was, in fact, rather funny [and the series, as a whole, could use a bit more of that].

Anna’s meeting with the commanders of the twenty-nine ships solidifies my belief that she’s in command – Council or no Council. Considering Lisa’s petition to reinstate Ty, as well, it seems very likely.

Anna does understand humanity to a great extent, which is what makes her such a danger. If Marcus was charge, things wouldn’t be going neatly as well for the Vs.

The irony of Erica and Marcus offering to help each other was pretty delicious. It makes me wonder if Marcus was in on the assassination plan. He seemed genuinely grateful and he’s not nearly the actor that Anna is.

The discovery that, not only are there Fifth Columnists on the NY mothership [and therefore likely on all twenty-nine ships], but that they are in some key positions means that V security isn’t that great. Unless they are being monitored without their knowledge – but Joshua’s actions make that seem unlikely. Erica’s discovery that Dale was a V would not be something they’d let pass without some kind of action.

The resistance is officially underway – with three humans and a V working together. Ryan will have to reveal himself to Jack and Erica if he wants to be as effective as he can be.

We’ve seen Alan Tudyk in two of the first four eps. I wonder if Dale is gone for good, or if the Vs have effective cloning technology…

Who is John May? Calling him the first Fifth Columnist is not giving us a lot of information.