Entertainment News for The Rest of Us
Michelle Alexandria
Contests 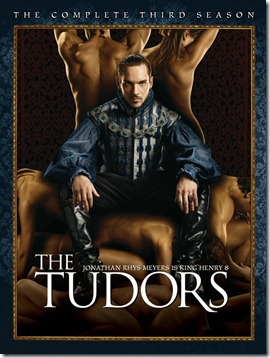 TV’s most sexy and scandalous hit drama is back with The Tudors: The Complete Third Season! Golden Globe winner Jonathan Rhys Meyers (Elvis) stars as a young King Henry VIII, a ruler whose reign changed the course of history forever. Now for the first time on DVD, the complete third season of this delicious and daring drama from Showtime is available in a 3 disc DVD set including every broadcast episode and loads of special features including and the first two episodes of Showtime’s hit show United States of Tara and an exclusive featurette called the Tudors Timelines.

We have 10 Copies of this awesome series to give away. To win all you have to do is follow us on Twitter at http://www.twitter.com/facebook.  Once you follow us, send us a tweet saying you want the Tudors DVD. Tuesday, Dec 2nd we’ll select 10 winners at random. Our goal is to start using Twitter and Facebook for all of our Contest announcements and move away from sending out a newsletter.  So sign up for our Facebook (http://www.facebook.com/eclipsemagazine and Twitter Pages (http://www.twitter.com/eclipsemagazine.)   On Tuesday be sure to send an email to contests@eclipsemagazine.com with your full mailing address. The DVDs will be delivered around Christmas.