Casey Newton (Britt Robertson) is not happy that NASA is closing down and dismantling the launch gantries at Cape Canaveral, so she sneaks into the property at night and disables equipment to set it back. Unfortunately, for all her cleverness, she gets caught, gets arrested and has to be bailed out by her NASA engineer father (Tim McGraw).

When her personal effects are returned to her, there’s a strange pin included that she’s never seen before – and when she touches it, she sees… someplace wonderful. As she tracks down the origin of the button, she gets into situations that are more than a little scary (robots with ray guns?) and winds up being taken to an isolated house by a strange little girl (Raffey Cassidy).

The house belongs to Frank Walker (George Clooney) – but before she can find out what he has to do with the pin, they are attacked by more robots and have to flee – in a most unusual manner – to France. There Casey learns a secret about the Eiffel Tower that leads to a trip to the place she saw when she touched the button – but it’s not the bright, shiny, happy place she saw. It’s deserted and gloomy. 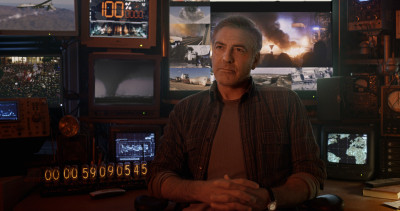 The first half of Tomorrowland – written by Damon Lindelof and Brad Bird and directed by Bird – is full of action and introduces us to Casey, her father and brother (Pierce Gagnon), and Athena (the strange little girl). There’s danger and excitement and the story really draws us in. It’s when we get to Tomorrowland that things shift, drastically, into something else again.

You see, the world is fifty-nine days away from ending – and the reason is to be found in the gloomy, abandoned Tomorrowland. In between some cool looking futuristic stuff, there’s a lot of talking – about ideas, about science and technical stuff – and most of it is a little to cerebral/sophisticated for younger viewers (how many six-year olds will get tachyon theory for starters?).

In the first half of the movie we get to see – in juxtaposition with Casey’s story – how young Frank (Thomas Robinson) got to Tomorrowland – and we get to see how it was at its idealized best.

This part is incredible fun – great ideas (without a lot of technical mumbo-jumbo), interesting characters and cool situations. Even the bad guys are fun in an over-the-top, totally askew kind of way. 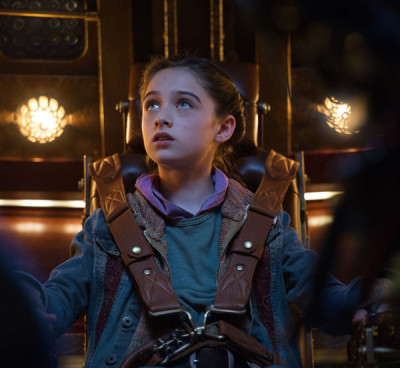 When we get to the abandoned Tomorrowland, everything becomes dark and depressing – despite the ray of hope that Casey provides. The villain here, Commander Nix (Hugh Laurie), is kind of boring and not actually evil so much as misguided.

In the second half of Tomorrowland, the pacing slows too much and even the action beats barely compensate.

Considering how brilliant The Incredibles and Mission: Impossible – Ghost Protocol were, Tomorrowland should have been a lot better.

On the plus side, the movie is smart (apart from the wrenching shift in tone and pacing), the cast is excellent and the effects are pretty awesome. It’s great to see a movie that isn’t a sequel or prequel – something that doesn’t resemble anything else out there, right now. It’s also pretty cool to see a movie that is based around big ideas and willing to take big swings to get them across.

On the negative side there’s that wrenching shift of tone, the pacing problems and the failure to keep the entire movie accessible to all audience members. Also, at 130 minutes, it feels twenty-to-thirty minutes too long – there should have been at least one more pass in the editing room.

Overall, I enjoyed Tomorrowland and am glad I saw it, but I wouldn’t rush out to see it again. It’s just a hair better than okay.