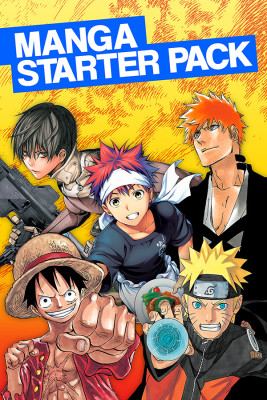 You’ve seen manga sections in bookstores and wondered about these weird, digest-sized comics that open the wrong way and have odd art styles that aren’t like what you’ve seen in North American and European comics – weird looking books that have equally unique titles, like Naruto, Food Wars, and Bleach.

Now, VIZ Media is offering first chapters of several of their digital titles for free. If you’re one of the readers I’ve described above, here’s your chance to explore new worlds and new and different styles of storytelling.

Titles included in this online sampling include All You Need Is Kill (the manga version of the novel that became the Tom Cruise movie Edge of Tomorrow), Bleach, Food Wars, Naruto and One Piece. Follow the jump for the details.

For A Limited Time Manga Fans Can Enjoy Chapters From ALL YOU NEED IS KILL, BLEACH, FOOD WARS, NARUTO And ONE PIECE For FREE On VIZManga.com!!

VIZ Media offers North American fans a special invitation to sample a variety of manga titles for FREE that will be available for a limited time beginning on May 18th from the VIZManga.com digital platform.

Readers can enjoy free chapters from several acclaimed manga series including the sci-fi battlefield drama of ALL YOU NEED IS KILL, the supernatural action of BLEACH, kitchen battles in FOOD WARS!, the adventures of the world’s most popular ninja in NARUTO, and the high seas pirate exploits of ONE PIECE. All of these series are available on VIZManga.com and via the VIZ MANGA App for the iPad®, iPhone® and iPod® touch, Android-powered smart phones and tablets. Similar manga promotions also may be available from VIZ Media digital partner sites.

ALL YOU NEED IS KILL, Chapter 1 ”Keiji Kiriya” • Rated ‘T+’ for Older Teens

When the alien Mimics invade, Keiji Kiriya is just one of many recruits shoved into a suit of battle armor called a Jacket and sent out to kill. Keiji dies on the battlefield, only to be reborn each morning to fight and die again and again. On his 158th iteration, he gets a message from a mysterious ally – the female soldier known as the Full Metal Bitch. Is she the key to Keiji’s escape or his final death?

Ichigo Kurosaki never asked for the ability to see ghosts – he was born with the gift. When his family is attacked by a Hollow – a malevolent lost soul – Ichigo becomes a Soul Reaper, dedicating his life to protecting the innocent and helping the tortured spirits themselves find peace. Find out why Tite Kubo’s BLEACH has become an international manga smash-hit!

Ichigo and his friends return to the world of the living, where life goes on as usual. But the arrival of a new transfer student raises disturbing questions, for outside school he carries a Zanpakutô and wears the mask of a Hollow…

Soma Yukihira’s old man runs a small family restaurant in the less savory end of town. Aiming to one day surpass his father’s culinary prowess, Soma hones his skills day in and day out until one day, out of the blue, his father decides to enroll Soma in a classy culinary school! Can Soma really cut it in a place that prides itself on a 10 percent graduation rate? And can he convince the beautiful, domineering heiress of the school that he belongs there at all?!

Naruto is a young shinobi with an incorrigible knack for mischief. He’s got a wild sense of humor, but Naruto is completely serious about his mission to be the world’s greatest ninja!

It’s been two years since Naruto left to train with Jiraiya. Now he reunites with his old friends to find out he’s still not the most accomplished of his former teammates. But when one of them is kidnapped, it’s up to Naruto to prove he’s got the stuff to save them!

As a child, Monkey D. Luffy dreamed of becoming King of the Pirates. But his life changed when he accidentally gained the power to stretch like rubber…at the cost of never being able to swim again! Years, later, Luffy sets off in search of the “One Piece,” said to be the greatest treasure in the world…

Now that they’ve reached the New World, the Straw Hat pirates are up against things they’ve never seen before! Dragons, centaurs and deadly samurai are just the tip of the iceberg compared to the true dangers of Punk Hazard! Can Luffy and his mates uncover the dark secrets of this mysterious island?!

VIZManga.com and the free VIZ Manga App continue to be the top platforms for reading digital manga and feature a massive library of the most popular series in the world. New series and volumes are added every Tuesday. These dynamic digital platforms offer fans the opportunity to explore and enjoy a massive catalog of new and classic manga titles that spans over 2,600 volumes across more than 225 different series.

Most manga volumes are available for purchase and download in the U.S. and Canada within the VIZ Manga application starting from only $4.99 (U.S. / CAN) each. For more information, please visit VIZManga.com or www.VIZ.com/apps.