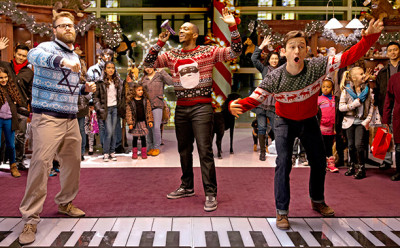 When Ethan’s (Joseph Gordon-Levitt) lost his parents in a car accident just before Christmas of 2001, his buddies Isaac (Seth Rogen) and Chris (Anthon Mackie) determined to keep him from wallowing in depression and took him out in what became the first event in a fifteen-year tradition. The only thing they’ve been unable to do in the fifteen years of Christmas partying is find a legendary party called the Nutcracka Ball.

With a very sympathetic wife, Betsy (Jillian Bell), and a child on the way – Isaac figures this year will probably be the last one; Ethan has just taken himself out of a perfect relationship because his fear of commitment, and Chris is finally just too famous to hang with, what with his becoming and NFL star with a handle on the whole social media thing. 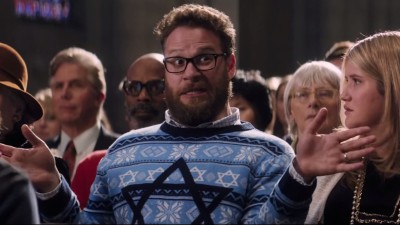 On this last nail in the coffin of tradition, Ethan comes into three tickets for the Nutcracka and, after the trio make their usual rounds (karaoke; eating Chinese food; taking in the tree at Rockefeller Center; playing the floor piano at FAO Schwartz), they plan to fulfill their dream of partying at the mythical bash – all in ugly Christmas sweaters!.

Chaos ensues. Isaac gets a head start thanks to a box of ‘every drug known to man’ he got from Betsy; Chris ferries them in a Red Bull limo (he’s a spokesman for them); they buy some weed from Mr. Green (Michael Shannon) for a quarterback they’re to meet at the Nutcracka; at an early pub stop, the boys run into Diana (Lizzy Caplan) and Sarah (Mindy Kaling) – Diana being the girl Ethan totally fled from; Sarah being her best friend – while Ethan and Diana awkwardly converse, Isaac manages to trade phones with Sarah, and Chris hooks up with a fan  (Ilana Glazer), who steals their weed. And we’re barely halfway through the movie.

Somehow, Isaac winds up at Midnight Mass, after the trio play some Nintendo 64 at Chris’ mom’s (Lorraine Toussaint) place, before they finally wind up at the Nutcracka. In and around all of the events of the night, Mr. Green pops up a couple more times – each time seeming both creepy and benevolent. 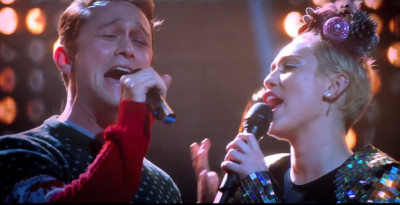 Even Miley Cyrus puts in an appearance – leading Ethan to confront his fear of commitment and feeling for Diana before embarrassing the hell out of himself. In fact, all three face their innermost fears – with Isaac getting to voice his in a very drugged out rant that’s one of the high (sorry) points of the movie (his conversation with Spencer’s interracial family comes in a close second).

Tracey Morgan gets special props among the many effective cameos for his gonzo narration of the tale.

The vague wave at a plot that fuels the movie allows for improvisation and both high and low humor. The Night Before isn’t A Christmas Carol – or even Scrooged – but with its heart on its booze, drug and puke stained sleeve, somehow it’s a scattershot wreck that works.