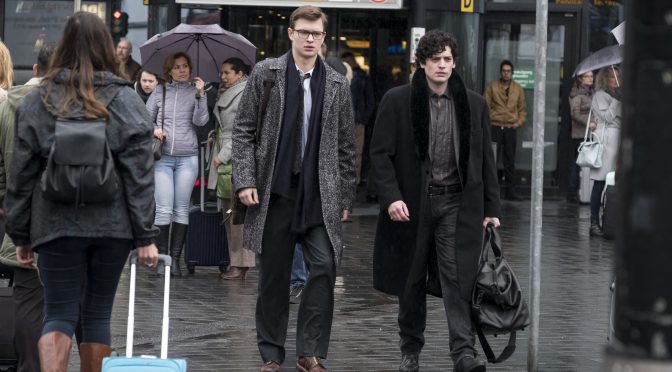 Donna Tart’s Pulitzer Prize-winning novel comes to the big screen in a lovely to look film that misunderstands its source material.

Normally there would be a lot to like about John Crowley’s The Goldfinch – it has a fine cast that performs well; the absolutely gorgeous cinematography, by the legendary Roger Deakins, is frequently breathtaking; the score by Trevor Gureckis is both unique and subtly effective; the set design and locations are impeccable – but by not understanding the purpose for the book’s construction it falls far too short of the quality we expect in an Awards Season release.

The Goldfinch is the story of Theodore ‘Theo’ Decker at two points in his life: following the tragic death of his mother and as a young man working in a business he never expected.

The film opens with the adult Theo (Ansel Elgort) stating his belief that everything is his fault as he prepares to commit suicide. We will eventually learn what, specifically, he means by that later.

Next we cut the first of a series of flashbacks that hint at the events of his mother’s death – Theo (Oakes Fegley) covered in ash – picking up a painting from the debris from an explosion in the Metroploitan Museum of Art. Further flashbacks give us further glimpses at the event and bring a young red-haired girl to our attention.

This is the first of several scenes which feature Theo’s One True Love, Pippa (played first by Aimee Laurence, then Ashleigh Cummings) – whom he first sees at the museum.

From there, Theo finds himself in the Barbour household and soon after being interrogated by police about his whereabouts at the time of the explosion.

The impression we get is that the police are questioning a suspect – there is nothing subtle about the way the boy is being browbeaten – until Mrs. Barbour (Nicole Kidman) bluntly reminds them that he was also a victim.

Theo’s stay at the Barbour home is one of the few places where he seems alive – his friendship the Barbours’ youngest son, the cheerfully earnest Andy (Ryan Foust) helps him deal, at least a little, with his loss.

The rest of the family – with the seeming exception of eldest son Platt (Jack DiFalco) – do their best to make him feel like he has a home. Until his alcoholic father, Larry (Luke Wilson), shows up with his girlfriend Xandra (Sarah Paulson) and spirits him off to Las Vegas – where he meets Boris (Finn Wolfhard), and older boy who is from, well, everywhere (but was born in Ukraine).

Theo is very perceptive and realizes that his father not only hasn’t stopped drinking, but is a con man who wants to use him in a scheme to get the money to open a restaurant. When that goes wrong, Larry dies in a car accident – his blood alcohol levels extremely high – and Theo heads back to New York..

This whole time Theo has kept the painting of The Goldfinch – for some reason it brings him comfort.

In New York, Theo reconnects with Hobie (Jeffrey Wright), whom he met through a strange encounter following the explostion that killed his mother. Under Hobie’s approving eye, he becomes interesting in antiques.

He also reconnects with the Barbour family, learning of their own family tragedy and, as an adult, becoming engaged to Kitsey Barbour (Willa Fitzgerald).

The reappearance of Boris (Aneurin Bernard) brings this part of his life to an end as he learns of a deception on Boris’ part that takes him to amsterdam (which turns out to be where we first saw him).

For a brief time before his suicide attempt, Theo once again feels alive.

If you haven’t read the book, The Goldfinch might be a diverting evening out (though at 149 minutes, it is a bit long).

If you’ve read the book, you will know that Theo’s mother’s death is really the most important moment in the story – the moment that we eventually is why Theo believes he is to blame for everything.

By dancing around that scene in flashbacks that never actually show the event in its entirety, screenwiter Peter Staughn and director Crowley never give us the sense of how everything that happens to Theo leads to his suicide attempt.

In a book about profound loss and – to a degree about Theo suffering from symptoms of PTSD – there is room to really explore character; Theo’s adventures with Boris (young and adult) add so much to the book’s intrigue; young Theo’s life with the Barbours is so much more detailed and vivid – we can feel what he’s feeling and understand him.

The film, with its skewed timelines and missing events, doesn’t just feel like a sketch, it seems more like a doodle.

For all that Crowley and company lose the impact of the novel, The Goldfinch is glorious to look at and features some fine work by its cast.

It’s a shame that the script fell so short.