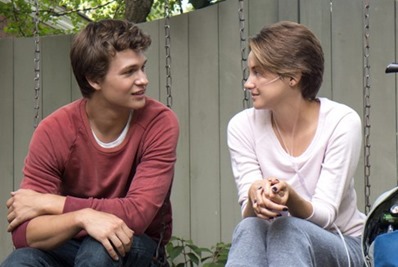 The movie adaptation of John Green’s celebrated novel is a darkly comic, epically intimate movie that will make you laugh, cry and think. Take that, blockbuster season!

Hazel Grace Lancaster (Shailene Woodley) is a self-described cancer grenade that will cause serious damage when she explodes. Augustus Waters (Ansel Elgort) is a cancer survivor who his right leg below the knee and, apparently, only fears oblivion. They meet odd-cute in a support group for kids with cancer run by a very Christian counselor (Mike Birbiglia) who sings absurdly simple, unwittingly funny songs and asks everyone to share their names, type of cancer and fears.

Both kids have supportive, loving parents whom we barely get to know – hers are Frannie (Laura Dern) and Michael (Sam Trammell). We see more of Frannie and Michael than Gus’ folks – enough to learn that they’ve never told her how much her death will devastate them because they didn’t want to burden her with that.

Hazel Grace (he never calls her just Hazel after a moment of gentle teasing) introduces him to a novel about cancer; Gus introduces her to a novel based on his favorite videogame – we never find out what she thinks of his favorite book; he loves hers but has issues with its ending.

He gently mocks her choice of wish (a trip to Disneyworld and Epcot Center) made when she was thirteen and informs her that he saved his wish – which plays into a trip to Amsterdam to meet the author of that book she loves so much. Turns out that he’s a drunken jerk, but that’s not what’s important about the trip – made very much against the recommendation of her doctor.

The Fault in Our Stars was adapted for film by screenwriters Scott Neustader and Michael H. Weber and – according to several teen girl members of the audience, was very faithful to the book (which is good to know but not essential to enjoying it). It never shies away from the ugliest details of the story’s reality (Hazel Grace’s omnipresent oxygen tank; Gus’ best friend (Nat Wolfe) losing his eyes to cancer), hitting those dark notes while finding humor and poignancy in them (as when she tries to undress during one of the most awkward love scenes ever committed onscreen; the three egging Isaac’s ex-girlfriend’s car). 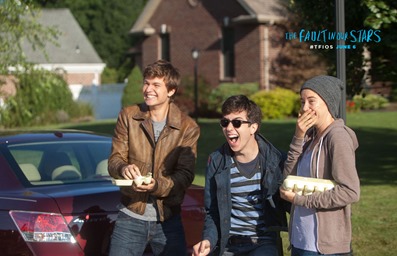 Director Josh Boone clearly has a great feel for the subject matter – he never shies away from its darkness, while giving it a buoyancy that allows the humor and drama to integrate without feeling manipulative.

Woodley is brilliant as Hazel Grace. When she describes the way she fell in love with Gus (‘I fell in love with him the way you fall asleep: slowly, then all at once’), it not only makes perfect sense, it also feels right (the two things not necessarily being synonymous). Elgort keeps Gus’ charm and confidence from seeming arrogant (a word his best friend, Isaac, uses to describe him in a eulogy – don’t ask).

The two developed a terrific chemistry when they played brother and sister in Divergent and so they work together onscreen in the same easy way as a Katherine Hepburn and Spencer Tracy (yes, I went there). They are natural, believable and genuinely touching – in a movie that could have been simply a teen cancer movie.

While a cast can perform the heck out a script without it having things to say, this is a movie that makes its audience think about big questions – why are we here; what happens when we die; does any of it matter, to name a few – but doesn’t even pretend to have any answers. Its honesty and compassion are refreshing in a way a lot of ambitious dramas are not. (I shudder to think how Nicholas sparks would have written this…)

If you haven’t read the book (like me), you will be surprised by the film’s dead on gallows humor and some of the plot turns. At 123 minutes, The Fault in Our Stars is actually longer than the blockbuster it opens up against but feels shorter.

On the Big Drink Scale, I had almost half my large drink left when the credits began to roll.

The Fault in Our Stars might have been adapted from a young adult novel for a teen audience, but it will reward any adult who feels like checking it out.