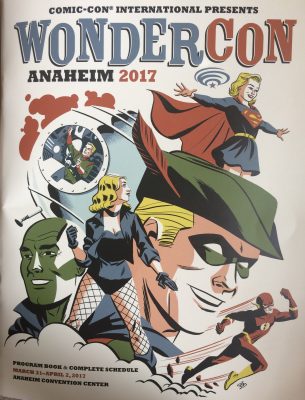 For the 4th year in a row, I made my annual trek to one of the largest comic conventions on the West coast –  WonderCon!  After a brief foray in Los Angeles last year, WonderCon returned to its usual location at the Anaheim Convention Center from March 31-April 2. With over 900 exhibitors, over 200 hours of programming featuring comics, movies, and TV shows, and numerous panels on your fave TV shows, the sold out convention was sure to delight fans again.  And this time Eclipse Magazine’s fearless leader Michelle Alexandria joined me all the from the east coast!

WonderCon is like going to an annual family reunion.  Whether it’s comic book fans waiting to update their rare comic book collection, cosplayers meeting up with their friends (or nemesis) at the Masquerade competition, or reporters such as myself coming back to chat with cast and crew of my fave or upcoming TV shows, it’s the WonderCon family.  Common costumes this year included groups of Anime characters, Wolverine, robots, Disney princesses, and the usual Batman and Spiderman and Joker.  This year, Warner Brothers, DC, BBC, Marvel, DreamWorks, NBC, 20th Century Fox TV, and ABC had presentations, which included previews and panels of such shows as TV shows Time after Time, Riverdale, Teen Titans Go!, Lucifer, Justice League Action, Gotham, Midnight Texas, Marvel’s Agents of SHIELD, Imaginary Mary, and The Goldbergs.

Speaking of family, the Eclipse Magazine family will be posting interviews from WonderCon this week, so make sure to check in periodically or go to our youtube channel for  If you are like me and like to plan out your schedule months in advance, or in this case a year out, mark your calendars for WonderCon Anaheim March 23-25, 2018 at the Anaheim Convention Center.

And make sure to check back to Eclipse Magazine and our youtube channel for upcoming interviews at WonderCon on select tv shows.

I end my yearly WonderCon update with a quote by Stan Lee that rings so true:  “When you work with people whom you like and you admire because they’re so good at what they do, it doesn’t feel like work.  It’s like you’re playing.” – Stan Lee