Annihilation Earth [tonight, 9/8C] harkens back to the allegorical science fiction B-movies of the ‘50s with its technology may doom us all stance. 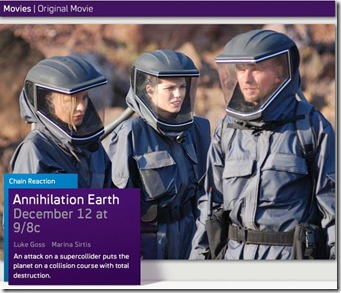 When one of the three supercolliders in the world is sabotaged, it destroyed the French city of Orleans and the surrounding area resulting in the deaths of thirty million people. The result of the blast is the creation of an energy field that, if not contained, will turn the Earth into a black hole.

David [Hellboy II’s Luke Goss] and Raja [Colin Salmon, Hex] are the two scientists who have taken the output of three supercolliders and turned to into safe, low-cost energy that has freed most of Europe from the need for carbon-based, polluting gas and oil – crippling the economies of the Middle Eastern countries that produced them.

When a terrorist named Khaled [Velislav Pavlov] sabotages the Orleans supercollider, he makes seem as if Raja was responsible. Despite David’s refusing to believe him capable of any kind of terrorist act, Paxton [Marina Sirtis] has him surveilled. Meanwhile David and three members of his team [including Muireann, played by Lexx star Xenia Seeberg] go into the Orleans ruins to see if they can discover whether the explosion was sabotage.

As B-movies go, Annihilation Earth is less fun than I’d thought it would be. This is partly because it’s front-loaded with a lot of exposition and techno-bafflegab – and partly because of inconsistencies that probably could have been prevented by an extra pass on the script. I’m talking about an area that we’re told has become radioactive waste, and yet our heroes wait until they’re actually in that area before putting on radiation suits. Little things like that…

On the other hand, why let little details get in the way of a good story? Well, maybe because the story is kinda average – though Goss, Salmon and Sirtis give entertaining performances and Seeberg is, well, even hotter than she was on Lexx [hard as that may be to believe], even though her costume here is far more substantial than the love slave costume she wore on that series.

Sirtis’ Paxton is a no-nonsense, southern woman whose drawl tightens up a bit under stress and elongates for effect when she’s being placatory. She’s the person you want on your side when it comes to fund raising and dealing with the opposition [any opposition]. She’s a bitch, but a bitch you want on your team.

Goss’ David is a family man and dedicated to science, but not slavishly. He puts on a good barbecue and is a good friend. He’s also fearless [see: going into ruined cities to search for evidence of sabotage]. He doesn’t believe for a second that Raja is a terrorist.

Salmon’s Raja is practical and intelligent. He’s the one who realizes what must done to prevent doomsday and has the stones to face down Khaled – even after the terrorist shatters his kneecap with a bullet [which brings up another problem, to wit: even with an amazing pain threshold, no one is going to hobble across a reasonably large room with a shattered kneecap; the pain would be enough to even prohibit hopping!].

Inconsistencies and dodgy science aside, Annihilation Earth has those three solid performances and a bunch of other stuff going for it: explosions, torture, satellites falling from the sky [along with airplanes, helicopters and maybe a space station…], and a countdown to extinction [chyroned in as typed bulletins – 78 Hours to Extinction…].

In the end, Annihilation Earth is an old-fashioned B-movie in every way except for the year of its making. It’s not appreciably better than its fifties progenitors, but not appreciably worse either. And like those fifties B-movies, it’s a lot of fun.