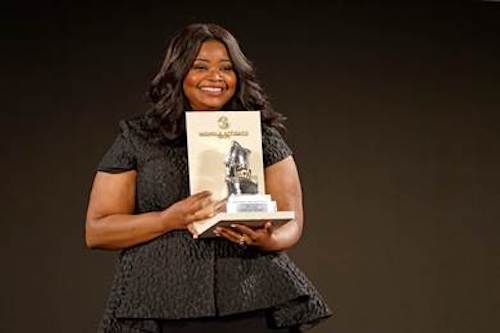 Apple TV+ upcoming drama series “Truth Be Told” became the first TV series to ever be celebrated at the 2019 Taormina Film Festival in Sicily, Italy, this weekend.  After debuting a first look at the show, which explores America’s obsession with true crime, star and executive producer Octavia Spencer was honored with the prestigious Taormina Arte Award.  Creator, […]

Only a really cool person would buy booze for some teens, right? Ma will be in theaters on May 31st.

Everybody’s welcome at Ma’s. But good luck getting home safe. Ma opens on May 31st. The film’s synopsis follows.

Set in a suburban fantasy world, Disney•Pixar’s Onward introduces two teenage elf brothers who embark on an extraordinary quest to discover if there is still a little magic left out there. Disney•Pixar has announced that the film’s voice cast will include Chris Pratt, Tom Holland, Julia Louis-Dreyfus and Octavia Spencer.

Guillermo Del Toro has a new film called The Shape of Water ‘an otherworldly fairytale’ set in a secret government laboratory where Elisa and her co-worker Zelda discover something magnificent. The first trailer for The Shape of Water suggests that it might be as indescribable and beautiful and even heartbreaking as his classic Pan’s Labyrinth. […]

Meryl Streep and Octavia Spencer are among the the final presenters announced for the 89th Academy Awards®. Both are nominated for acting Oscars® this year – Streep for the title role in Florence Foster Jenkins (Actress in a Leading Role); Spencer for the role of Dorothy Vaughn in Hidden Figures (Actress in a Supporting Role). […]

There’s a new international trailer for 20th Century Fox’s Hidden Figures – the story of the black women behind launching astronaut John Glenn into orbit. It features a fair bit of new footage. Check it out after the break. Hidden Figures stars Taraji P. Henson, Octavia Spencer, Janelle Monae and Kevin Costner and will be in […]

Summit Entertainment has released the final trailer for Insurgent, Part 2 of The Divergent Series. It’s title, Stand Together refers to much more than just the Tris/Four relationship. It’s a heckuva trailer. Check it out after the jump. Insurgent prmieres on March 20th.