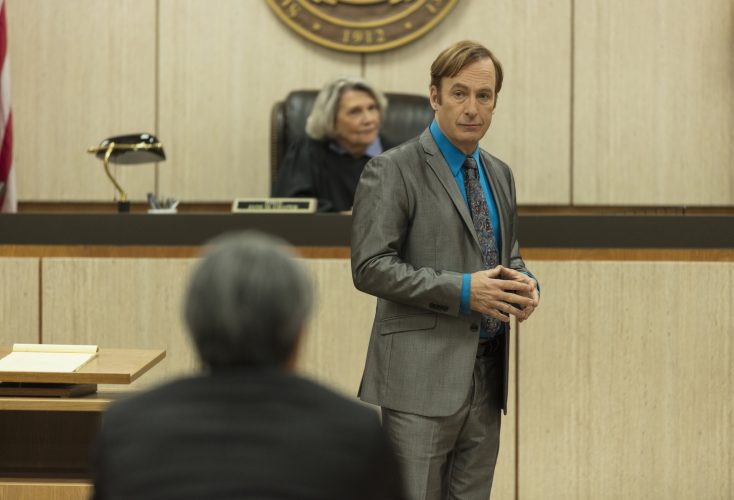 AMC’s Better Call Saul returns for its fifth season on February 23, 2020. To herald the return of Jimmy McGill & Co., the network produced two teasers – one for Saul and one featuring Gene at work in his Cinnabon store.

To celebrate the 10th anniversary of the debut of the Emmy® and Golden Globe®-winning Breaking Bad, AMC has set a marathon of the entire series beginning on Sunday, December 31st (2pm/1C). Every episode of the critically acclaimed five-season series will air in chronological order on Saturdays and Sundays through January.

AMC has renewed Breaking Bad prequel series Better Call Saul for a fourth ten-episode season. The show follows Jimmy McGill (Bob Odenkirk), a struggling lawyer – and decent guy who doesn’t mind cutting a few corners on occasion – as he evolves (or is it devolves) into the conscience-free Saul Goodman we first met in […]

The third season premiere of Better Call Saul (AMC, Mondays, 10/9C) opens with a cliffhanger involving Cinnabon manager Gene. How’s that for a change up?

Jimmy McGill looks like a special kind of bird in the season three key art for AMC’s Better Call Saul. Could jail time be in his future? Better Call Saul returns on Monday, April 10th (10/9C). The first details of what lies in store for Jimmy follow…

What could a has been greeting card writer want more than a spiffy new holiday to inspire him? Girlfriend’s Day is a new holiday for which the perfect card must be written. To that end end, there is a contest – a contest that wordsmith Ray Wentworth must win. A contest that could involve romance, […]

Nominated for seven Emmy® Awards, the second season of Better Call Saul found Jimmy McGill attempting to make it as a member of a high-powered legal firm while growing closer to Kim Wexler. Meanwhile Mike found himself inadvertently getting mixed up in cartel business – and that’s just the tip of the proverbial iceberg… The […]

Journalist David Carr’s memoir, The Night of the Gun is being developed for television – as a miniseries – by AMC and Sony Pictures Television. The memoir details Carr’s life as an addict – as uncompromisingly detailed as any story he ever wrote for a newspaper. Better Call Saul’s Bob Odenkirk is slated to play […]