Playing to its strengths, Incredibles 2 works superbly when the whole family – Bob Parr/Mr. Incredible (Craig T. Nelson) and Helen Parr/Elastigirl (Holly Hunter) and their kids, Violet, Dash and Jack-Jack – are together and dealing with family stuff (even in the midst of a super-brawl).

Sub-plots (like Violet’s first crush and impending first date) add details that build the story, but the arc that keeps Helen separate from her family slightly less interesting. 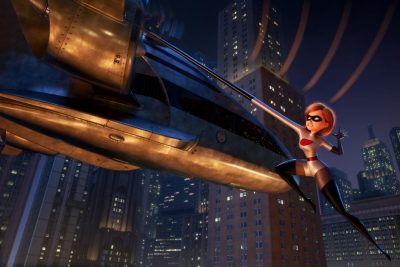 Incredibles 2 opens immediately following the appearance of the Underminer (Cliff Ratzenberger) and immediately the Parrs are put into a bad spot – stopping the Underminer’s monster digger leaves a lot of damage and, even though they kept it to a minimum of what might have happened, they’re skewered by the press (and opportunistic politicians) for letting the villain escape. Even Frozone’s (Samuel L. Jackson)

Even Rick Dicker (Jonathan Banks) can’t help them anymore – their remaining support program has been shut down, leaving them in a seedy motel for a maximum of two weeks. Then they’ll be homeless.
When things can’t possibly get any worse, telecommunications billionaire Winston Deavor (Bob Odenkirk) approaches Helen and Bob about trying to get supers made legal again.

He posits that supers only look bad in the press because no one sees their side of the story. Focusing on Elastigirl – and having her outfitted with a new suit and a tiny camera (courtesy of Deavor’s sister, Emily, voiced by Catherine Keener) – should provide a more balanced look at a super in action. 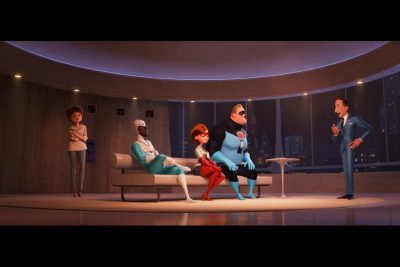 So, Helen sets off – leaving Bob to look after the kids.

This is where things become simultaneously funny and poignant.
Bob’s ego is dealt a blow when Winston says Helen will do a better job, PR-wise – than him. Then there’s the frustrations of dealing with the kids’ lives – Dash is struggling with ‘new math’ (I’m old enough that remember that particular nightmare); Violet has a crush on a cute guy (who may or may not have seen her in uniform without her mask), and Jack-Jack is suddenly developing powers, many, many powers.

Like the first film, Incredibles 2 continues to have a James Bond-esque feel – especially in the score by Michael Giacchino and Emily’s inventions (not to mention the house Deavor lets the Parrs move into). 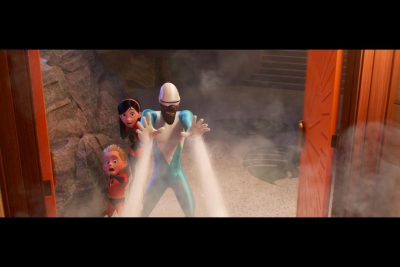 Enter ScreenSlaver – a villain who can hypnotize anyway who looks into any kind of screen – and really hates supers.

Brad Bird, who wrote and directed the original, has put together a pretty compelling tale of the second chapter of the Parr family’s lives.

There are the requisite action sequences (and they are pretty spiffy), but it’s the characters that make Incredibles sing: Helen’s happiness at being the first agent of the supers’ comeback; Bob’s bruised ego and his adaptation being the househusband (with the help of Frozone and Bird’s exquisitely hilarious Edna Mode); Violet’s crush and its consequences; Jack-Jack’s many and varied powers (and their consequences), and the family reunion under tempestuous circumstances). 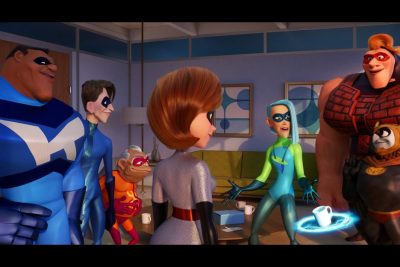 Nice Touch Department: when the world’s leader convene to restore the supers’ legality, they are accompanied by supers from their countries (some of whom I’d love to see again).

As always, with Pixar, the animation is brilliant, and the 3D is superb.
Bird weaves character and action and plot together as well he did in the original (and The Iron Giant), so the film as a whole is as delightful as I had hoped.

One bothersome detail – the full house in which I viewed Incredibles 2 either had no air conditioning, or it was not up to the task of keeping a full house cool. When one’s shirt is sopping with sweat during a movie, it tends to detract from the experience.

It was only after I had returned home and cooled down (literally) that I was able to reflect on Incredibles 2 and really see just how good it was. When I left the theater, I was looking at a B+, but upon that reflection, that changed. Incredibles 2 was actually pretty incredible.