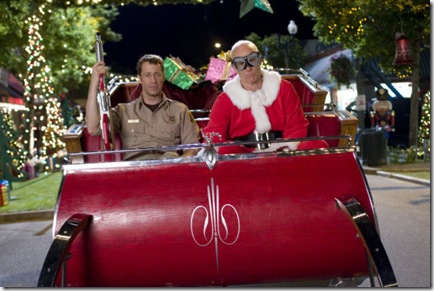 Back in town, a grumpy sheriff stops in at Carpe Diem and encounters an even gloomier group of kids who’ve lost their chance to go on an out-of-town jaunt because of the malfunctioning shield, so he decides to tell them about an even more unusual Christmas as Vincent [Chris Gauthier] serves up the hot chocolate.

It begins with an anxious Fargo [Neil Grayston] overseeing final preparations for the annual Christmas party while Jo [Erica Cerra] deals with a mysterious scientist named Dr. Noah Drummer [Chris Parnell] who’s trying to take a volatile experiment with him as he heads out for Christmas. Add an appearance by Matt Frewer’s Taggart – now trying to figure out a scientific way to explain Santa’s mythic feats – and a secret Santa who seems to know everyone’s most wanted present [Fargo’s involves The Six Million dollar Man] – and the result is pure Christmas chaos! Naturally, it’s up to Carter and Henry [Joe Morton] to try to get things back to what Eurekans laughingly refer to as ‘normal.’

Unfortunately, the screener provided by Syfy was of a rough cut, so I have no idea who the writer and director were. That’s a shame, because Oh Little Town is one of the best episodes of Eureka, this season. It’s smart, funny and appropriately heart-warming without being particularly gooey. There’s even fruitcake!

Photo by Eike Schroten/Courtesy of Syfy