Haven enters its fourth season with a mysterious, handsome stranger getting a juicy, season-long arc. How handsome? Sheriff Jack Carter handsome! Eureka’s Colin Ferguson will play a character whose secret agenda leads him to Audrey Parker (whom you will recall vanished into thin air at the end of season three).

Haven went into production of its thirteen-episode fourth season today. Follow the jump for the official press release.

END_OF_DOCUMENT_TOKEN_TO_BE_REPLACED

Last week, Eureka’s Co-Creator, Jamie Paglia and star, Colin Ferguson, took some time to chat with a group of bloggers/journalists about the series’ final season, which premieres this evening on Syfy [9/8C]. The two were their usual charming, witty, goofy selves, though there was a bit of an undercurrent of sadness with The End looming in just a few short weeks – in spite of the show growing its audience, year-to-year, every season so far in its run – along with their joy at being able to let fans see what they think is the best season of the series yet.

END_OF_DOCUMENT_TOKEN_TO_BE_REPLACED 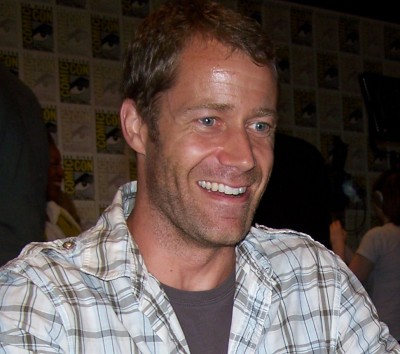 Eclipse Magazine’s coverage of  Comic Con 2010 continues as we sat in on the The Syfy channel’s double billed press roundtable of Eureka and Warehouse 13.
We’ll have lots of goodies to share with Eclipse Magazine readers from this very informative combo, but right now we leave you with a video treat: Colin Ferguson talking about working on season 4 of Eureka and the drawbacks to wearing period piece costumes.

When Eureka [Syfy, Fridays, 9/8C] begins its fourth season tomorrow evening, the main characters find themselves in Camp Eureka, three years before the town was founded – and their return to the present has a little, teensy glitch [or six].

Series Co-Creator Jaime Paglia and series star Colin Ferguson [Sheriff Jack Carter] went well beyond their allotted time on the teleconference Q&A, they were so happy to be talking about what sounds like it will be Eureka’s strangest and most entertaining season yet.

END_OF_DOCUMENT_TOKEN_TO_BE_REPLACED

At he conclusion of Eureka’s [Syfy, Fridays, 9/8C] mid-season finale, Sheriff Jack Carter [Colin Ferguson] had saved the day but, because he disobeyed a direct order from Department of Defense honcho General Mansfield [Barclay Hope]. Welcome Back Carter [oh, c’mon! We all knew he’d get his job back – the question was always how he’d do it] picks up exactly where the cliffhanger left off.

Mansfield has literally ordered a new sheriff of the assembly line – or at least from the genius mind of Fargo [Neil Grayston]. Not only is there a new sheriff in town, but he’s a robot. For those who have always thought that Eureka was Mayberry with geniuses, you’ll appreciate that when the new guy/bot [Ty Olsson, Battlestar Galactica, Men in Trees] introduces himself, he says, “Call me Sheriff Andy.”

END_OF_DOCUMENT_TOKEN_TO_BE_REPLACED

On July 18th of 2006, The Sci Fi Channel aired the pilot episode of a quirky little show called Eureka which garnered some of the highest progam ratings The Scifi Channel received for that season and the series became an instant hit for them. Tonight, The Scifi Channel will air the 3rd season premiere of Eureka with an episode titled Bad to the Drone and will introduce Frances Fisher as the new and ruthless head of Global Dynamics.

Eureka takes place in a top secret high tech community that is supposedly located somewhere in the Pacific Northwest. Being the kind of community it is, Eureka is mainly inhabited by highly brilliant scientific minds from all branches of the sciences who have come together to work for a company called Global Dynamics to create new technological and scientific advancements, some of which sometimes go wildly out of control.

END_OF_DOCUMENT_TOKEN_TO_BE_REPLACED

HBO Max has unveiled the key art (posters) for Doom...