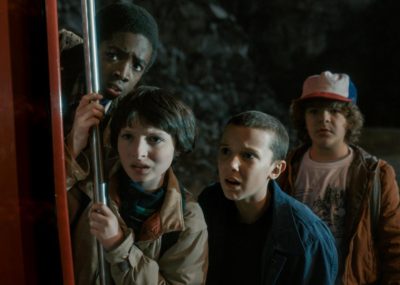 If you love the films of Steven Spielberg and John Carpenter, or the books (and filmic adaptations) of Stephen King, then you might very well love Netflix’s new series, Stranger Things.

This a story of a boy who goes missing after a day of Dungeons & Dragons and the efforts of his best friends and mother to find him. It’s a story that starts out looking like it a might be supernatural thriller then quickly becomes a science fiction adventure. It hangs on a plot that’s reminiscent of E.T. The Extraterrestrial, but references The Thing, Poltergeist and other films in fresh new ways.

Created by The Duffer Brothers (Wayward Pines), the series quotes films (or books) from the trio in about the same way that the last person in the line of a game of telephone quotes the first person in line – the sounds may be similar, but the order, context and meaning might be completely different.

The series’ eight episodes have chapter titles, like a novel (Chapter One: The Vanishing of Will Byers), and begins with a familiar scientist-fleeing-something-Very-Bad-and-not-making-it sequence before shifting to four boys in a basement playing Dungeons & Dragons: Will Byers (Noah Schnapp, Bridge of Spies, The Peanuts Movie), Mike Wheeler (Finn Wolfhard), Dustin Henderson (Gaten Matarazzo) and Lucas Sinclair (Caleb McLaughlin, Shades of Blue).

When Mike’s mom, Karen (Cara Buono, Person of Interest, Mad Men), calls a halt to their campaign, the three boys set out for home on their bikes – and Will never makes it home. 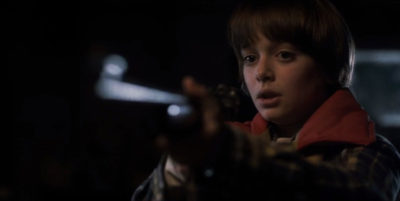 When he doesn’t show up at school the next day, his friends get worried – and his mother, Joyce (Winona Ryder) reports him missing. It takes six hours for Hawkins’ Chief of Police, Jim Hopper (David Harbour, The Newsroom, State of Affairs) to get back to her and she is freaked out!

While the townspeople start searching for Will, his friends – against orders from their parents – get together to look for him, too – and encounter a very strange little girl (Molly Brown, Intruders).

Meanwhile, the head of the lab we saw in the teaser, Dr. Dr. Martin Brenner (Matthew Modine, The Dark Knight Rises, Proof), is looking for the girl who we learn is called Eleven (the boys call her El for short) – and she is possessed of some unique abilities.

There are sub-plots involving Mike’s sister, Nancy (Natalia Dyer, I Believe in Unicorns), and her boyfriend, Steve (Joe Keery); and Will’s brother, Jonathan (Charlie Heaton, Wayward Pines). There are also a couple of bullies who make the mistake of picking on Will’s friends one time too many, and a couple of truly dim police officers – among others.

Dr. Brenner seems to be modeled Peter coyote’s role in E.T., but he’s much more manipulative and evil – and Modine has a great time underplaying him to a level where he can seem, on the surface, likable and trustworthy. 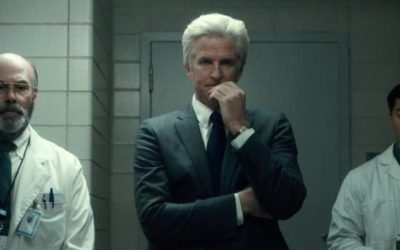 In the 1984-set Stranger Things, the Duffer Brothers have put together a satisfyingly eerie, creepy and occasionally genuinely scary thriller that moves along at a comfortably hectic pace – except when it doesn’t need to. There’s a flow to the series’ eight episodes that makes the six-and-a-half hour ride feel like considerably less.

Part of what makes the series so strong is that, despite wearing its influences on its sleeve (and referencing of them in fun and unexpected ways) it never feels like a rip-off: the writing is strong and the characters act – and sound – like real people. Part of it is the superb casting (Harbour, in particular, gets a well-deserved lead role and really runs with it). Another part of it is the invisible direction (six eps directed by the brothers; two by Shawn Levy) and editing (which is never showy). The final ingredient is the music – a mix of early eighties classics (and not-so-classics) with a score that both evokes the period and underscores the weirdness of the goings on.

Sure, it’s fun to spot references (Will races to a shed from his house in more frantic version of Elliott following Reese’s Pieces to find E.T. – with a hugely different conclusion and sequences that remind of spirits from Poltergeist, for example) – but those references aren’t there just to satisfy 80s movie nostalgia; they’re there because their familiarity makes us comfortable with characters and settings until things suddenly go sideways.

Some characters follow type; others undergo profound changes (keep an eye on Steve, for example), while others not only don’t change and evolve, they actively resist.

In terms of performances, Harbour is superb as Hopper – whose drinking problem comes as a result of a terrible tragedy, but who is willing to do his job properly and thoroughly; Ryder plays up Joyce’s nervous, fearful energy – giving the impression that she’s on the verge of total collapse but showing an underlying toughness. 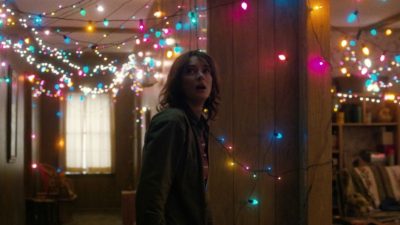 Wolfhard, Matarazzo and McLaughlin get the boys’ geekiness beautifully – and when El. pops up, their very different reactions are completely believably. Brown shows that her turn as the creepy little girl on Intruders is just the tip of her acting iceberg – Eleven is powerful, insecure, frightened and rebounding from serious mental abuse; her almost instant bonding with Mike seems almost reflexive: he’s the first person to treat her with wonder and respect.

There’s a consistently high level of performance quality throughout – even one-note roles feel real because of the actors’ commitment.

Both of the show’s mysteries – what happened to Will; what happened to make El who and what she is – are developed well – and the peripheral sub-plots (which sometimes only seem peripheral) make the world of Stranger Things feel like a lived-in place.

This is, simply put, a truly fine adventure that hooked me from the start and, after six-and-a-half hours (plus breaks to get food and such), left me breathless and satisfied.

Netflix has winner here. Though there suggestions of such, I really hope there isn’t a second season – it would be very, very hard to top this.