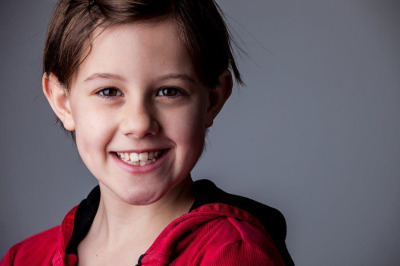 Steven Spielberg has cast the key role of Katie for his adaptation of Roald Dahl’s BFG (Dahl’s personal favorite of his own stories).

Ruby Barnhill will play the young girl who becomes friends with the Big Friendly Giant and discovers the beauty and danger of Giant World.

Production on Roald Dahl’s BFG will begin in early 2015 with itsa premiere set for July 1st, 2016. For more, follow the jump.

NEWCOMER RUBY BARNHILL HAS BEEN CAST AS “SOPHIE”

IN SPIELBERG’S ADAPTATION OF ROALD DAHL’S “THE BFG”

LOS ANGELES, CA (DECEMBER 16, 2014) – DreamWorks Studios announced today that newcomer Ruby Barnhill has been cast as the young girl, Sophie, in Roald Dahl’s beloved classic story, “The BFG.”  Steven Spielberg will direct the film adaptation of the children’s novel.  Published in 1982, “The BFG” is the tale of a young London girl and the mysterious Giant who introduces her to the beauty and peril of Giant Country. Barnhill joins Mark Rylance who has been cast as the “Big Friendly Giant.”

“The BFG” will be 10-year-old Ruby Barnhill’s first feature film role.  She has been acting for two years and will appear in the upcoming BBC BAFTA award-winning children’s drama “Four O’Clock Club.”  Ruby lives in Cheshire with her parents, younger sister and Tom the cat and is a member of her local youth theatre.

“I feel incredibly lucky and I’m so happy,” said Ruby Barnhill.  “Sophie gets to go on this wonderful adventure and I’m so excited that I get to play her.”

“After a lengthy search, I feel Roald Dahl himself would have found Ruby every bit as marvelous as we do,” said Steven Spielberg.  “We have discovered a wonderful Sophie in Ruby Barnhill.”

Luke Kelly, Managing Director of the Roald Dahl Literary Estate and Roald Dahl’s grandson, said, “The character of Sophie is one of the most endearing young heroes in Roald Dahl’s stories. She is as brave as she is curious and has an innate sense of wonder. Many congratulations to Ruby on landing the role. We hope that making ‘The BFG’ proves an utterly magical adventure for her.”

DreamWorks acquired the rights to the book in 2010 after Kathleen Kennedy brought it to the company.  Melissa Mathison, who last teamed with Spielberg and Kennedy on “E.T.,” has written the screenplay.  Spielberg, Frank Marshall and Sam Mercer will produce while Kennedy, John Madden and Michael Siegel are on board as Executive Producers.  Kristie Macosko Krieger and Adam Somner are Co-Producers.

Spielberg will begin production on “The BFG” in early 2015 and it will open in theatres on July 1, 2016.  The Walt Disney Company is distributing the film in the U.S. and select international territories while Mister Smith Entertainment is handling distribution in Europe, Africa and the Middle East.  DreamWorks’ partner, Reliance, will distribute the film in India.

DreamWorks Studios is a motion picture company formed in 2009 and led by Steven Spielberg in partnership with The Reliance Anil Dhirubhai Ambani Group.  The company’s recent releases include Spielberg’s “Lincoln,” starring Daniel Day-Lewis, Sally Field and Tommy Lee Jones.  The film has grossed over $180 million at the U.S. box office and was nominated for twelve Academy Awards® with Daniel Day-Lewis winning for Best Actor.  Other releases include “The Hundred-Foot Journey,” starring Helen Mirren, Steven Spielberg’s “War Horse,” based on Michael Morpurgo’s award-winning book and was nominated for six Academy Awards® including Best Picture, and “The Help,” which resonated with audiences around the country and earned over $200 million at the box office and received four Academy Award® nominations with Octavia Spencer winning for Best Supporting Actress.

First published in 1982, “The BFG” was Roald Dahl’s own favourite of his stories. Today, the book is published in 38 foreign languages, including Vietnamese, Korean, Ukrainian, Indonesian, Albanian, Estonian, Hebrew and Welsh.

About Roald Dahl and his legacy

Roald Dahl (1916–1990) was one of the world’s most inventive, mischievous and successful storytellers. His stories are currently available in 58 languages, and, by conservative estimate, he has sold more than 200 million books. Ten percent of all the Roald Dahl royalties are donated to the two Roald Dahl charities – Roald Dahl’s Marvellous Children’s Charity and The Roald Dahl Museum and Story Centre. Roald Dahl Day is marked annually all over the world on Roald Dahl’s birthday, September 13th, and in 2016 there will be global celebrations for the Centenary of his birth, which will coincide with the release of “The BFG” movie.

For further information on “The BFG” and the wonderful world of Roald Dahl please visit: